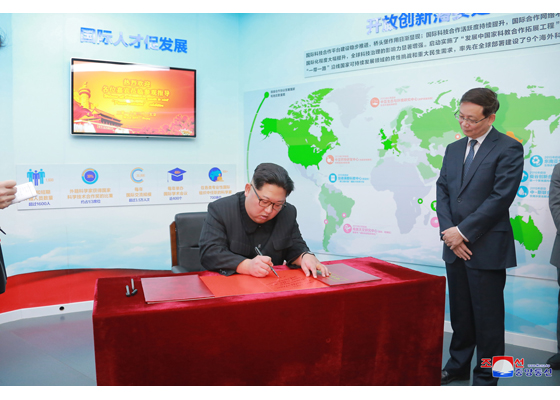 A very lively meeting was held during the afternoon of March 31 in downtown Toronto with Professor Kiyul Chung of the 21st Century Institute based in Washington DC. Prof. Chung is also an Associate Professor at Kim Il Sung University in Pyongyang and at universities in China and Japan.

Prof. Chung shared his thoughts about the upcoming third Inter-Korean Summit between Kim Jong Un, leader of the Democratic People’s Republic of Korea (DPRK) and Moon Jae-in, President of the Republic of Korea (ROK) scheduled April 27 on south Korean territory in Panmunjom at the Demilitarized Zone that divides the Korean nation. He also gave his views on the planned DPRK-U.S. Summit set for May where Kim Jong Un will meet U.S. President Trump.

This public event was organized by the Korea Truth Commission (KTC) (Canadian Chapter) and the Korean Federation in Canada. Philip Fernandez, spokesperson of the KTC (Canadian Chapter), in his welcoming remarks noted that Prof. Chung had been in Toronto twice before. His first visit was in connection with organizing the Korea Truth Commission’s historic People’s International War Crimes Tribunal in New York City on June 23, 2001, in which a delegation of 60 Canadians took part.

Fernandez also pointed out that at this People’s Tribunal, a panel of jurists from countries around the world, including Canada, found the U.S. administrations, from 1945 to the time of the tribunal, guilty of crimes against peace, war crimes, and crimes against humanity that were committed against the peace-loving Korean people, before, during and after the Korean war, and called for financial compensation and an apology from the U.S.

The main point Prof. Chung made during his almost two-hour long presentation was that there is a sea change taking place on the Korean Peninsula. It has found expression recently in the joint Korean team at the PyeongChang Winter Olympics, the subsequent meeting of south Korean officials with Kim Jong Un on March 3 and the plans for the upcoming Third Inter-Korean Summit on April 27, as well as the DPRK-U.S. Summit in May.

He stated that a new situation has materialized whereby the DPRK has earned for itself a strong position from which it commands respect as an equal, sovereign country.

Even the most hawkish political advisers to U.S. President Trump are forced to admit that there is no military solution to the crisis on the Korean Peninsula and that the only approach left is to hold direct talks with the DPRK, something that would have been unthinkable 20 years ago.

He gave credit for this achievement to the DPRK’s uncompromising stand in defence of its right to self-determination, in the face of great difficulties, and its development of a strong deterrent to any aggression against its territory.

Prof. Chung pointed out that the attitude of the present south Korean government toward the DPRK has created the space for renewed initiatives toward co-operation between north and south. He noted that for the first time since the Second World War, a south Korean President has been brought to power by a mass movement of the people, with the election of President Moon Jae-in in an effort to rid themselves of the corrupt administration of Park Gyeun-hye.

Prof. Chung said President Moon Jae-in has expressed his desire to re-establish relations between the DPRK and ROK in the first of his two terms in office — relations destroyed by the two most recent U.S.-installed puppet regimes of Lee Myung Bak and Park Gyeun-hye.

Prof. Chung attributed great significance to the meeting between President Xi Jinping of China and the Chairman Kim Jong Un when the latter visited Beijing from March 26 to 28. He noted that, in his opinion, based on the warm fraternal and historic reception that Kim Jong Un received in Beijing from Xi, it can be concluded that the relationship between the two neighbouring peoples has reached a new stage.

He observed that the recent situation where China has not taken a principled stand to defend and support the DPRK but instead contributed to its demonization is now a thing of the past and it intends to play a bigger role in ensuring peace and stability on the Korean Peninsula.

In the question and answer session that followed the main presentation, Prof. Chung elaborated these points. He said that he is optimistic that the upcoming summits will create new opportunities for the Korean people to work together for their national aspiration for peace and reunification.

He pointed out that in the March 3 meeting in Pyongyang between the envoy of President Moon and Chairman Kim, the latter gave his assurance to President Moon that the DPRK has no intention of attacking the ROK and that he would do everything possible to move inter-Korean relations forward as one people and one nation.

Philip Fernandez informed the meeting of the continuing work of the KTC (Canadian Chapter), particularly circulating the Korea Peace Petition, and called on everyone to join this work at the upcoming pickets and to circulate the petition amongst their family and friends. He noted that close to 3,200 Torontonians have signed the peace petition, expressing their active sentiment for peace on the Korean Peninsula.

Henry Na, the Toronto correspondent for MinPlus news in south Korea, informed that he is heading to Pyongyang to participate in the Pyongyang Marathon on April 8 and invited everyone to sign a large Unified Korea flag that he is planning to present to the people of the DPRK.

Prof. Chung thanked everyone for their participation. He hopes to be back in Canada at the end of May and a public meeting will be organized at that time so that he can update Torontonians on the results of the Inter-Korean summit as well as the DPRK-U.S. summit between Chairman Kim and President Trump.