Kim extends olive branch to Seoul ahead of Winter Olympics 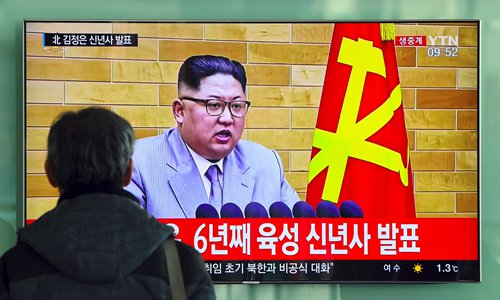 North Korean leader Kim Jong-un has shown greater diplomatic dexterity in his New Year speech by sending a reconciliatory signal to South Korea while maintaining his usual hard-line rhetoric toward the US.

Observers said the first three months of 2018 are an important strategic window to return to talks over the Korean Peninsulaand warned that missing the window could cause the current situation to deteriorate irrevocably, after Kim said he would consider sending a delegation to the Winter Olympic Games to be held in Pyeongchang, South Korea, in February.

"North Korea's participation in the Winter Games will be a good opportunity to show the unity of the people, and we hope the Games will be a success. Officials from the two Koreas may urgently meet to discuss the possibility," Kim said.

Analysts said Kim's speech serves to attenuate the pressure imposed by the UN sanctions and to win favors from Beijing and Moscow by saying he was "open to dialogue" with Seoul.

"The foundation for solving the nuclear crisis is for the two Koreas to ease their relations, which can then push for a change in ties between North Korea and the US," Wang Sheng, a professor of international relations at Jilin University, told the Global Times, adding that so far, the US has shown no sign of compromise.

"The first three months of 2018 are a critical window to push for North Korea to return to the negotiation table and manage the nuclear crisis through peaceful means," Wang said.

"If relevant parties miss that window and the US-South Korea military drills are carried out as usual, the entire situation could move toward a different direction with Pyongyang more determined to carry on with its nuclear programs," he said.

South Korean President Moon Jae-in has said that North Korea's participation will ensure the safety of the Pyeongchang Olympics and proposed last month that Seoul and Washington postpone large military drills that the North denounces as a rehearsal for war until after the Games.

US Defense Secretary James Mattis said Friday that the US will not change its military exercise schedule, which is usually in March and April, due to diplomatic concerns, while leaving the door open to rescheduling because of other concerns.

Kim threatened that North Korea would focus on "mass producing nuclear warheads and ballistic missiles for operational deployment" in the coming year.

"The entire US is within range of our nuclear weapons, and a nuclear button is always on my desk. This is reality, not a threat," he said, while emphasizing that "these weapons will be used only if our security is threatened."

"Much of North Korea's hard-line rhetoric serves as a diplomatic bluff toward the US and a smoke bomb," Da Zhigang, director of the Institute of Northeast Asian Studies at the Heilongjiang Provincial Academy of Social Sciences, told the Global Times.

"However, Kim did grab the opportunity of the Pyeongchang Olympic Games and responded, in a positive way, to South Korea's proposition. This helps win favor from China and Russia and consequently helps Pyongyang gain an advantage in the superpower politics of Northeast Asia," Da said.