The US to Attack North Korea Before March > 새 소식

The US to Attack North Korea Before March 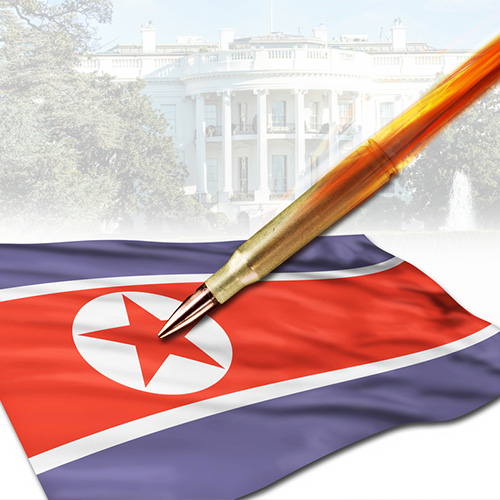 Which of these is the most important?

The answer is, ‘none of the above’.

The most important financial or geopolitical issue in the world today is a coming war between the U.S. and North Korea, probably in the next twelve weeks.

How can I be so sure about the timing? The Director of the Central Intelligence Agency told me.

In a private conclave in Washington DC on October 20, 2017, CIA Director Mike Pompeo told a small think tank group (including me) that it would be imprudent to assume it would take North Korea more than ‘five months’ to have a reliable arsenal of nuclear-armed ICBM missiles. These could strike U.S. cities and kill millions of Americans.

That would create an element of surprise — and avoid the surprise of a faster than expected deployment of strategic weapons by North Korean leader Kim Jong Un.

Why can’t the U.S. just live with a nuclear
armed North Korea?

We managed to live with a nuclear armed Russia and China during the Cold War.

We relied on deterrence, containment, sanctions, diplomacy, and eventually arms treaties to avoid a nuclear war. Why not do the same with Kim?

He said acceptance of a nuclear-armed North Korea is ‘unacceptable’. The U.S. will stop North Korea from acquiring its nuclear capability in the first place rather than learning to live it.

The reasons for this are many. None of the other nuclear-armed powers ever threatened to attack the United States unless attacked first.

North Korea has threatened to attack and destroy the U.S. many times. The best approach for dealing with threats from dictators is to take them at their word.

Adolph Hitler told the world in the 1920s that he would unite Germany, conquer Europe and kill Jews. He did so in the 1930s and 1940s.

Osama bin Laden declared war on the United States in 1996 and again in 1998. In 2001 he attacked New York and Washington and left thousands of Americans dead in Manhattan, Virginia and Pennsylvania.

When Kim Jong Un says he will attack the United States with nuclear weapons, it is reckless to believe otherwise.

Other consequences of a nuclear-armed North Korea include the acquisition of nuclear weapons by Japan and South Korea (for defensive reasons), and Iran (for offensive reasons, using technology provided by North Korea).

Once Iran has nuclear weapons, Saudi Arabia, Egypt, and Turkey will follow. In short, a nuclear-armed North Korea leads quickly to nuclear weapons in six other countries, many mutually hostile to each other and the U.S.

That kind of proliferation exponentially increases the odds of a nuclear war between one or more of these countries sooner than later.

That’s one more reason to draw a line in the sand and not allow North Korea to have nukes in the first place.

The U.S intelligence community does not believe so. They estimate that Kim is a rational actor, albeit rational within his own limited field of vision.

Kim saw that Libyan leader Qaddafi gave up his nuclear weapons. Libya was then invaded by NATO, and Qaddafi was killed.

Iraq’s Saddam Hussein had a nuclear weapons program in the 1980s, which he gave up after the first Gulf War. Years later a U.S. coalition invaded Iraq and Saddam was hanged.

Iran has a nuclear weapons program that it has not given up. The mullahs who rule Iran are still standing.

Therefore, Kim feels safer with his nuclear weapons than without. That’s not crazy; its prima facie rational based on the evidence. Kim will continue his weapons program.

Is Kim posturing just to get sanctions relief? No. Kim could have sanctions relief at any time with a phone call to Washington. He just has to discontinue his weapons programs.

Kim does not have to go to such great lengths including an H-bomb test, ICBM tests, and development of nuclear-armed submarines just to get sanctions relief. He’s in ‘breakout’ mode and going for a robust nuclear weapons capability.

Doesn’t Kim understand the damage he will
suffer if the U.S. attacks?

In the first place, Kim believes we’re bluffing. He bases that partly on Obama’s failed ‘red line’ on Syrian use of chemical and biological weapons.

Syria used the weapons anyway, and Obama did nothing. Kim took notes. He believes the U.S. is a paper tiger.

Will China help the U.S. assassinate Kim and force regime change in North Korea? The answer is no. China does not want to destabilize North Korea because they fear a flood of refugees into China.

They also fear a reunification of the Korean peninsula on terms favourable to the U.S. if the Kim regime is destabilized.

China also believes the U.S. is bluffing. I learned this recently during lunch at an exclusive club in Washington DC with one of the top geopolitical strategists in China and an advisor to the Chinese leadership.

What about collateral damage to South Korea
and possibly Japan?

The potential damage is real, but the U.S. sees that as a necessary cost of ending the North Korean threat once and for all.

No American flag officer will trade Seattle for Seoul. We live in a new hard-nosed ‘America First’ world.

The South Koreans and Japanese understand this. That’s why they’re cooperating with us in ending the threat from North Korea.

The situation will not improve for them if we do nothing. Once North Korea has a nuclear arsenal, blackmail of Japan, and an invasion of South Korea are just a matter of time.

The U.S. hopes to mitigate the collateral damage with a fearsome combination of cyber-warfare, psychological warfare, special operations, massive bombing, and limited air and amphibious invasion.

The U.S. also has secret weapons technology including the hypersonic Waverider drone (launched from B-52 mother ships) and a microwave drone than can ‘fry North Korean missile launching systems. When the war starts, North Korea won’t know what hit them.

I assess the probable outcomes in North Korea as follows:

The market is not even close to pricing in these probabilities. The market will begin to do so as the D-Day draws near, and the signals become clear.

What about the stock market?

A war with North Korea does not necessarily imply a stock market crash.

In fact, wars have historically been good for stocks as defence contractors, manufacturers, miners, technology firms and other sectors ramp up to meet wartime demands.

War also typically results in inflation as the Fed stays on hold in terms of nominal interest rates and capacity constraints are hit.

The government can delay inflation with wage and price controls, but it always emerges sooner or later as it did in 1919 and 1946 after the First and Second World Wars respectively, and again in the late 1970s after the Vietnam War.

The biggest winner will be gold both because of its safe haven status, and because it offers a hedge against inflation.

Fundamentals already favour gold, but a war with North Korea is likely to result in a super-spike.

I am telling you the war is coming, but I’m not alone. The President, Secretary of Defense, Secretary of State, Director of the CIA, and the National Security Advisor are all saying the same thing. It’s just that no one is listening.