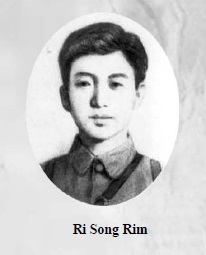 Ri Song Rim cried\and said he would not go.
Ryang had begun to hate him since Ri began visiting the Children’s Corps school to show off the small pistol which I had given him. One day, when we were at a meeting, he had gone to the school in secret\and called out the snotty children who were playing in the yard to the willowy dike to show off his pistol. Before he had disassembled the pistol\and reassembled it, the break was over. When the teacher came into the classroom to begin the new lesson, he was surprised,\and called out the children’s name. None of the children who had gone out to see Ri’s pistol had come back.
Ryang heard this story\and suggested to me I should replace the\orderly with another man because he might cause an accident.
But I did not accept his suggestion.
Ri Song Rim had been to Onsong\and Jongsong with me,\and stayed for a long time on the mountain at the back of Tumen. He was a plucky\and courageous\orderly who was not afraid of death.
I remember he was killed in battle near Tuanshanzi. We were fiercely attackedrom two sides by the Japanese army\and the Jiangan army. As he was running to convey my\orders to Ping’s unit, he was surprised by the enemy. I saw his Mauser after he died. The magazine was empty\and there were several dead bodies of the enemy scattered around him. He made the enemy pay dearly for the blood he shed. We cried so sadly that Ping Nan-yang also cried loudly.
When I found Ri’s dead body on the field of our victory the first thing I saw in my mind’s eye was the Children’s Corps school in Wangqing which he had visited as if it were his own home. In this school he was one of many childhood friends who were inseparablerom each other.
How could I meet the Children’s Corps members of Wangqing after burying Song Rim in north Manchuria? I choked on my tears,\and there was a lump in my throat.
When my comrades-in-arms suggested we break the frozen ground\and bury him, I dissuaded themrom covering his body with frozen earth because I felt as if he would come to life again\and snuggle into my bosom. I could not turn on my heel knowing I had to leave my child\orderly in this terribly frozen land.
Ri Song Rim, who complained of the steepness of the mountain as we crossed the Laoyeling Mountains, is now lying quietly in that valley with his comrades-in-arms, listening to the song of new life ringing across the vastness of Manchuria.
추천 0