An epidemic of fever broke out in the guerrilla zone in the autumn of that year. This acute disease, with the symptoms of chill, high fever\and rash, swept through the valley of Xiaowangqing. I, too, fell ill\and was confined to my bed in Shiliping. I learnt later that this illness was an eruptive typhus.
The younger generation nowadays does not know what this disease is like, for they live in a land which has long been free of epidemics.
But when we were waging the armed struggle in the mountains 60 years ago, the people in the guerrilla zone went through untold sufferingrom epidemics. Since thousands of people lived in the relatively small valley, epidemics of various kinds would break out. The enemy’s “punitive” forces would attack frequently, creating havoc as they pursued peoplerom hill to hill, so we could not improve the unsanitary conditions\and take appropriate measures to prevent epidemics, even though we wished to. All we could do was to stretch a straw rope across the gate of the house of people who had been affected\or paste a warning notice on the wall: “Off\limits. An epidemic site.”
This was the worst possible trial for us–an epidemic raged at the same time as the enemy hurled thousands of troops against us day in\and day out, in a do-or-die attempt to eliminate the guerrilla zone. To make matters worse, I was ill\and many of the leadership were pale with worry over the fate of the guerrilla zone.
They sent a platoon leader, Kim Thaek Gun, together with his wife\and about a platoon of soldiers to guard\and attend to me. When the other units went out to fight, these guerrillas remained behind to defend Shiliping. Mr.\and Mrs. Kim had been living in Yehe in north Manchuria\and had moved to Wangqing by way of Muling, determined to participate in the revolutionary struggle in east Manchuria.
In addition, Choe Kum Suk, the Wangqing county party committee member for women’s work, stayed in Shiliping, on assignmentrom the party committee to nurse me.
At first I received medical care in the front room of the house of a woman called Chun Ja. Her husband, Kim Kwon Il, had been the secretary of a district party committee\and later worked as the secretary of the county party committee.
Whenever the enemy attacked the guerrilla zone, Kim Thaek Gun would carry me on his backrom valley to valley to seek shelter.
As the enemy’s “punitive” operations intensified, they carried me deep into a valley in Shiliping along a water course,\and built a hut for my shelter under a huge steep rock, difficult for the enemy to assault. One could only approach it by means of a rope hanging down the rock. Here I recovered completely thanks to the ministrations of the three people tending me.
These unforgettable individuals snatched merom the jaws of death. But for their diligent nursing, I would not have survived in the valley of Shiliping. I was so ill that I lost consciousness several times. I was told later that each time I slipped into a coma, they would shed tears,\and cried, “For goodness’ sake, pull yourself together. What shall we do if you are so ill?”\and when Kim Thaek Gun was out looking for provisions, Choe Kum Suk would support me as we wandered in search of a shelter. It is no exaggeration to say that I only recovered thanks to her help.
I had received much assistancerom Choe since the early days after my arrival at Wangqing. When I had arrived at Macunrom the campaign in north\and south Manchuria, she was the member of the party committee of district No. 2, Dawangqing, for women’s work. At that time Ri Sin Gun had been in charge of the women’s association of the county. Whenever Choe came to Ri to discuss their work, I would often see her at Ri Chi Baek’s house. They were on intimate terms, as close as sisters. Ri Sin Gun praised her greatly for having a fast hand at writing, to which I paid no heed at first. I simply wondered how fast she could write. But I was surprised when I saw the minutes of a meeting she had taken. The contents of the speeches delivered at the meeting had been recorded in full. Modern stenographers are said to write fast, but I have not seen one who could compare to her. She could file away all the discussions we had in a single night. We let her record the proceedings of important meetings.
She was as magnanimous as a man\and warm-hearted;\and at the same time, she was a woman of principle, faithful to the revolution. She would have hauled a boat over a sandy beach if I had asked her to do it. I sent her to the enemy-controlled areas on several occasions on various missions,\and she worked efficiently there.
As a woman, she sympathized very much with me for having lost my parents. She took the same loving care of me she would have taken of her own younger brother,\and I called her “sister.” She would visit me before anybody else whenever I returnedrom the battlefield, slipping into my hands something she felt I needed. Sometimes she would sew up tears in my clothes\and knit wool into underwear for me. If she did not come to Lishugou for a long time, I would go to see her. We were so much like brother\and sister that we would laugh\and joke when we met. When she met old people in the village, she would address them in the dialect of Hamgyong Province. The words she used were funny\and her intonation was even more interesting. Even when I mimicked the way she spoke\and carried the joke too far, she did not get angry, but simply smiled. But broad-minded as she was, she would not accept jokes about her being pretty. 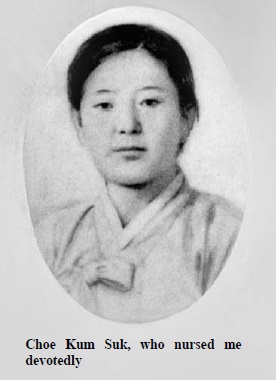