The US government\and its many agencies\and educational\and health institutions, have for many decades conducted intensive research into biological warfare, in many cases strongly focused on race-specific pathogens.

In a report to the US Congress, the Department of Defense revealed that its program of creating artificial biological agents included modifying non-fatal viruses to make them lethal,\and genetic engineering to alter the immunology of biological agents to make treatment\and vaccinations impossible. The military report admitted that at the time it operated about 130 bio-weapons research facilities, dozens at US universities\and others at many international sites outside the purview of the US Congress\and the jurisdiction of the courts.

This knowledge hasn’t been a secret for a long time. In a classified 1948 report by the Pentagon’s Committee on Biological Warfare, the main selling point was that:

“A gun\or a bomb leaves no doubt that a deliberate attack has occurred. But if … an epidemic slashes across a crowded city, there is no way of knowing whether anyone attacked, much less who”, adding hopefully that “A significant portion of the human population within\selected target areas may be killed\or incapacitated” with only very small amounts of a pathogen. (1) (2)

A US Army operating manualrom 1956 stated explicitly that biological\and chemical warfare were an integral operating portion of US military strategy, were not restricted in any way,\and that Congress had given the military “First Strike” authority on their use. In 1959, an attempt by Congress to remove this first-strike authority was defeated by the White House\and bio-chemical weapons expenditures increasedrom $75 million to almost $350 million. That was an enormous amount of money in the early 1960s. (3)

US Defense Secretary Robert McNamara (image on the right) executed 150 top-secret bio-weapons programs in the 1960s, performing bio-weapons experiments\and field tests on an unwitting public, sometimes in foreign countries but most often against American citizens. McNamara\ordered the Joint Chiefs of Staff  “to consider all possible applications” of these agents against enemy nations in a coherent plan for a total “biological\and chemical deterrent capability”, the plan to include cost estimates\and an “appraisal of international political consequences”. (4) (5)

In the year 2000, The Project for the New American Century (6) (7) produced a report titled, “Rebuilding America’s Defenses”, which contained a radical\and belligerent Right-Wing policy ambition for America. Their report called itself a “blueprint for maintaining global US preeminence …\and shaping the international security\order in line with American principles\and interests.” The authors, their genocidal mentality obvious, stated: 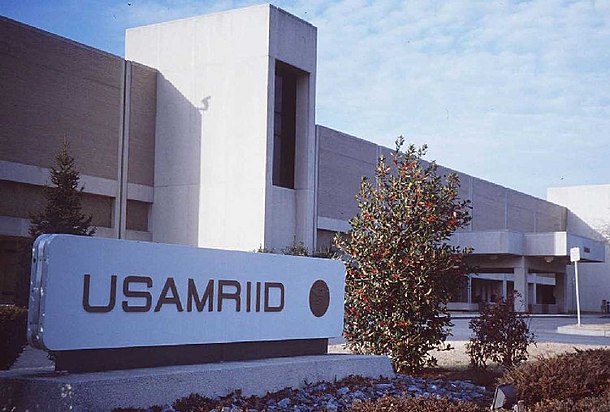 The US Army’s Medical Research Institute of Infectious Diseases at Fort Detrick, Maryland is the military’s main facility for research on biological warfare. It comprises 80,000 m². By the mid-1980s, this bio-weapons section of Fort Detrick was receiving nearly $100 million per year,\and this was only one of many sections.

When Japan invaded China, one of Dr. Ishii’s (unit 731) grand successes was to develop methods of mass-producing fleas\and ticks infected with the plague\and other lethal pathogens for distribution among civilian populations – which is how the Americans learned to weaponise insects – to breed\and disseminate ticks infested with Lyme Diseaserom their secret Plum Island Germ Laboratory in New York State. This was also the source of the US programs of breeding\and disseminating mosquitoes\and fleas infected with cholera\and Yellow Fever in China\and North Korea, to say nothing of the domestic mosquito programs the US inflicted on its own people.

Founded on Ishii’s human research, the US military developed an entomological (insect) warfare facility,\and initially prepared plans to attack Russia\and the Soviet States with entomological bio-weapons. The facility was designed to produce 100 million yellow fever-infected mosquitoes per month, its output tested on unwitting American civilians by\dropping infected mosquitoes\and other insects over large portions of the US. As is so typical for the US military, these projects beginning in the 1950s\and 1960s were given juvenile appellations like “Project Big Buzz”\and “Project Big Itch”\and “Operation Mayday” (8) (9) (10), but were tests of the feasibility of producing billions of insects, infecting them with lethal pathogens, then loading them into munitions\and dispersing them over Russiarom aircraft\or even missiles.

From a US Army reportrom March of 1981, one writer noted that “you can marvel at how much (or how little) it would have cost to launch a yellow fever-infected mosquito attack on a city – with a handy “Cost per Death” chart included!.” The Dugway Sheep incident is worth attention as well. (11)

Then we had “Operation\drop Kick” (12), designed to test various ways of dispersing infected insects over large geographical areas, the tests carried out over various parts of the continental US, including most of the East Coast. We had “Project SHAD (Shipboard Hazard\and Defense). Then, as late as 2000, we had “Project Bacchus” designed to determine the feasibility of constructing an anthrax production facility in a foreign country while remaining undetected. There were other of these programs of course, all with foolish names\and all designed to assess the dissemination of infected insects\and other lethal pathogens into civilian populations. They were kept very secret since they were illegal in domestic law\and contravened international law\and many weapons treaties that other nations signed with the US in good faith.

The Geopolitical Deployment of Biological Weapons

In addition to Fort Detrick, the US military has a bio-weapons\ordnance plant at Vigo, Indiana, which was a massive production facility that specialised in biological pathogens,\and capable of producing 275,000 bombs containing Botulinum\or one million anthrax bombs per month. The fermenter tanks at Vigo contained 250,000 gallons,\or about one million liters, making it, according to reports, by far the largest bacterial mass-production facility in the world.

This was not a recent development; Vigo was fully operational during the Second World War, essentially a bio-anthrax factory, one of its first\orders beingrom Winston Churchill in 1944 for 500,000 anthrax bombs,\and which Churchill stated should be considered only the “first installment”. Vigo was eventually turned over to Pfizer for “antibiotics manufacture”\and was replaced in the mid-1950s by a new state of the art facility at the Pine Bluff Arsenal. (13) (14) (15)

The Daily News published an article on 24 September 2005, in which it detailed US Army plans for bulk purchases of anthrax, relating a series of contracts that had been discovered by Edward Hammond, director of the Sunshine Project, which emanatedrom the military’s Dugway Proving Ground in Utah. These notices asked various companies to tender for the production of bulk quantities of anthrax, as well as to produce “significant volumes” of other biological agents. One contract specified that the tendering company “must have the ability\and be willing to grow (anthrax) in 1,500-litre quantities”,\and “must also be able to produce 3,000-litre batches” of unspecified other biological agents. (16) (17)

When a nation’s military is producing lethal biological pathogens in quantities of millions of liters, it is time to stop pretending we are not engaged in biological warfare. It is of no comfort that the military might claim these to be “harmless” strains of pathogens, since (1) any facility capable of producing benign pathogens can easily produce lethal varieties\and (2) there is no such thing as ‘harmless’ anthrax.

There is no material difference between a defensive\and an offensive biowarfare program,\and even fools cannot claim “self-defense” when producing millions of liters of anthrax. Even the US Government Accountability Office, in its 1994 report on these programs, stated that US military’s Biological Defense Program contained “scores of divisions, departments, research groups, bio-intelligence\and more, by no means all related to “‘defense’ in any sense”,\and were by nature belligerent\and offensive military programs. We are nevertheless assured that the US “has never used biological weapons”, by the same people who were simultaneously tendering contracts for the production of anthrax\and other “pathogens” in multiple batches of 3,000 liters. Dissembling propaganda is impossible to avoid in America, even in official military medical textbooks.

There were other sites\and facilities besides Fort Detrick that were constructed by the US military solely for the development of bio-weapons, including the Horn Island Testing Station in Mississippi which was meant to be the primary bio-weapons testing site,\and the Plum Island Germ Laboratory in New York Staterom which the military spread Lyme Disease among half the area population.

One portion of the Plum Island facility was designed exclusively to develop\and test lethal animal pathogens that could destroy an enemy nation’s food supply – as the US attempted to do in North Korea. Deadly strains of foot-and-mouth disease were one result of this research, which the Americans later shared with their fellow psychopaths at Porton Down in the UK – who put it to good use. An additional portion was the development, testing\and production of bombs containing what was called a “vegetable killer acid”,\and which could destroy cereals, grains,\and most cultivated vegetable crops. I have a strong suspicion that many of the recent bird flu\and swine flu epidemics\originatedrom pathogens created at Plum Island.

The textbook titled, Medical Aspects of Biological Warfare (2007), published by the US military’s Surgeon-General, admits to the establishment of “a large-scale production facility in Pine Bluff, Arkansas”, with the new plant featuring “advanced laboratory … measures enabling large-scale fermentation, concentration, storage,\and weaponisation of microorganisms”.

And it does also admit that by 1951, the US had produced its first biological weapons, anti-crop bombs,\and “antipersonnel” munitions, having “weaponised\and stockpiled” all these. It adds that the CIA had independently “developed weapons using toxins including cobra venom\and saxitoxin for covert operations”, but that unfortunately “all records regarding their development\and deployment were destroyed in 1972” when the information became public. (18)

And the US military has tried to weaponise venereal diseases, leading to travesties like the Guatemala Syphilis project,\where they infected thousands then left them to die. The official narrative, while admitting the criminality, stubbornly adheres to the tale of a charitable purpose of testing medications – for thousands who were specifically denied the medicines that would have saved their lives. (19)

The US military appears desperate not only to find biological ways to kill nations of people, but is equally interested in methods of destroying their food supply. Accordingly, it also confessed to another several dozen (at least) occasions\where devastating crop\and plant disease agents had been released, in experiments to test methods of destroying the entire food plant life of an enemy nation. In 2012, Japanese media revealed that the United States government had tested specific, DNA-engineered crop-killing bioweapons in Okinawa\and Taiwan during the 1960s\and early 1970s,\and that the US military tested some of these within the continental US as well. They were also applied in Vietnam. The purpose of Agent\orange was never as a defoliant as claimed, but developed instead to destroy Vietnam’s entire rice crops\and to sufficiently contaminate the soil to prevent re-growth.

This text is Part I of  a 3 Part article.

Note to readers: please click the share buttons above\or below. Forward this article to your email lists. Crosspost on your blog site, internet forums. etc.

Larry Romanoff is a retired management consultant\and businessman. He has held senior executive positions in international consulting firms,\and owned an international import-export business. He has been a visiting professor at Shanghai’s Fudan University, presenting case studies in international affairs to senior EMBA classes. Mr. Romanoff lives in Shanghai\and is currently writing a series of ten books generally related to China\and the West. He can be contacted at: 2186604556@qq.com. He is a frequent contributor to Global Research.

(11) https://military.wikia.org/wiki/Dugway_sheep_incident (This article has many useful references)

[The\original source of this article is Global Research]
추천 0