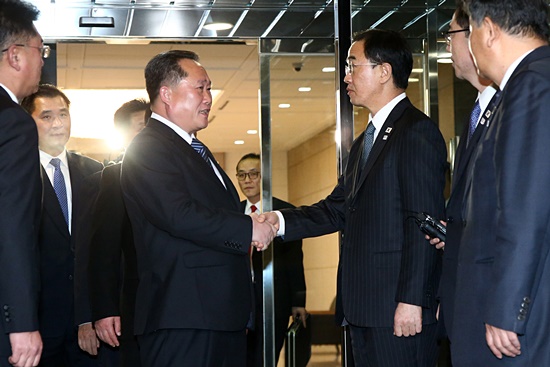 Panmunjom, January 9 (KCNA) -- Inter-Korean high-level talks were held on Tuesday at the "house of peace" in the south side portion of Panmunjom amid great expectations and interests of all the fellow countrymen and people at home and abroad.

At the talks the north and south authorities discussed in earnest the principled issues arising in successfully holding the 23rd Winter Olympics in south Korea and improving the inter-Korean relations, and adopted the following joint press release.

Inter-Korean high-level talks were held at Panmunjom on Jan. 9.

At the talks both sides had sincere discussions of the participation of a delegation of the north side in the 23rd Winter Olympics and Paralympics and the improvement of the inter-Korean relations in conformity with the desire and expectations of all the Koreans and agreed as follows:

The north and the south agreed to proactively cooperate in ensuring that the 23rd Winter Olympics and Paralympics in the south side area would be successfully held, providing an occasion for enhancing the prestige of the nation.

In this regard the north side agreed to send a delegation of the National Olympic Committee, sports teams, a cheer group, an art troupe, a Taekwon-do demonstration group and a press corps along with a high-level delegation to the Olympics, and the south side agreed to provide conveniences needed for them.

Both sides agreed to open working-level talks with regard to the north's dispatching of an advance party for a field tour beforehand and participation in the Winter Olympics, and agreed to discuss a schedule in the way of exchange of documents hereafter.

The north and the south agreed to make concerted efforts to ease the military tension, create a peaceful environment on the Korean peninsula and promote national reconciliation and unity.

They shared the viewpoint that the present military tension should be ironed out and for this agreed to have talks between the military authorities.

They agreed to promote national reconciliation and unity by invigorating contacts and travels, and exchange and cooperation in various fields.

The north and the south agreed to respect the north-south declarations and solve all problems arising in inter-Korean relations through dialogue and negotiations on the principle of By Our Nation Itself.

For doing this, both sides agreed to have talks of every field along with high-level talks between the north and the south aimed at improving the inter-Korean relations. -0-