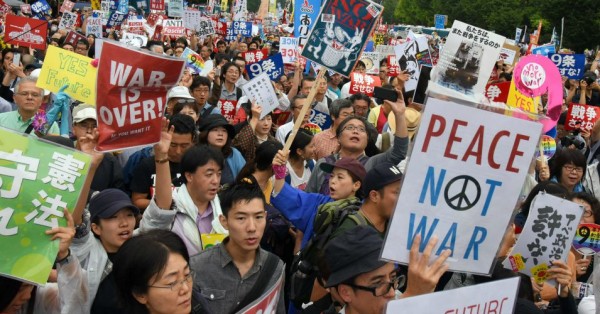 PSI affiliates have overwhelmingly endorsed a joint emergency resolution proposed by South Korean Pilipino and American trade unions calling for an immediate de-escalation of tensions between the U.S. and North Korea.

The Korean Affiliates Council, PSLINK of the Philippines and the American Federation of Teachers in a display of international cooperation and solidarity worked together to move a resolution, calling for diplomacy and not war. Alarmed by the escalating tensions and rhetoric between the Trump administration and the North Korean Regime, the PSI World Congress voted overwhelmingly in support of this resolutions and demanding an end to the threat of nuclear war.

Tensions between North Korea and the USA have dramatically escalated since the election of Donald Trump, who uses twitter to taunt and mock the North Korean leader, Kim Jong Un, among others. The proposal of the resolution led to a number of interventions on the floor, with delegates pleading with the countries to sit down at the table and negotiate.

Ann Twomey from AFT said ” Foreign policy cannot be conducted through 140 characters of a twitter stream….History will not forgive us if we do not act now.”

Wol San Liem from the Korean Affiliates Council said “nuclear weapons in the hands of any country is bad for everyone. Since the Korean war, the pressure of the United States has been part of the problem.”

Mark Hancock from Canadian Union of Public Employees was met with applause from the floor giving emotional remarks condemning Donald Trump  for creating and instilling fear in his young children, concerned that World War III is imminent.

“Imagine there’s no countries. It isn’t hard to do. Nothing to kill or die for. And no religion too.”

Resolution 50: War Is Not the Answer

WHEREAS, in 2005, the AFL-CIO Convention passed a historic resolution calling for the rapid withdrawal of U.S. troops from Iraq, and an end to the country’s occupation; and

WHEREAS, in 2011, the AFL-CIO Executive Council declared that American troops must be brought home from Iraq and Afghanistan, and that the militarization of our foreign policy has proven to be a costly mistake; it is time to invest at home; and

WHEREAS, now 75% of Americans believe the “result of the war in Iraq was not worth the loss of American lives and other costs”; and

WHEREAS, the eventual cost to taxpayers for the Afghanistan and Iraq wars will top $4 trillion; and

WHEREAS, since 2001 the United States has used military force in numerous countries, leading to the death of an untold number of civilians, the destruction of infrastructure, a massive number of refugees and the destabilizing of sovereign nations--—there are now military threats directed against Iran and North Korea, with a potential death toll in either country in the millions and which, in the case of North Korea in particular, involve the threat of nuclear war; and

WHEREAS, while the United States ranks first by far in military spending, it ranks 7th in literacy, 20th in education, 25th in infrastructure quality, 37th in quality of health care, 31st in life expectancy, and 56th in infant mortality; and

WHEREAS, 6,831 United States military personnel have died in wars in Iraq and Afghanistan and about one million have been injured. There are over 39,000 homeless military veterans; on any night, more than 1.4 million are at high risk of homelessness, of which 9% are women, and 20 military veterans/active duty military take their own lives each day; and

WHEREAS, it is vital that the workers and our unions promote a foreign policy independent of the political interests and foreign policy of Wall Street and corporate America;

THEREFORE, BE IT RESOLVED, that the AFL-CIO promotes and advocates for a foreign policy based on international solidarity of all workers, mutual respect of all nations and national sovereignty, and calls upon the president and Congress to make war truly the last resort in our country’s foreign relations, and that we seek peace and reconciliation wherever possible; and

BE IT FURTHER RESOLVED, that the AFL-CIO calls upon the president and Congress to bring the war dollars home and make our priority as a nation rebuilding this country’s crumbling infrastructure, creating millions of living wage jobs and addressing human needs such as education, health care, housing, retirement security and jobs; and

BE IT FURTHER RESOLVED, that the AFL-CIO will advocate for the necessary federal funding to meet the needs of veterans by providing them comprehensive services for health care, housing, education and employment, and to establish outreach to at-risk veterans who may not be availing themselves of existing programs.