As it was well past midnight, the officials tried to persuade him to go to sleep.

However, he was still giving advice on an important issue, when an official summoned by him came into the room.

Today you should draw some illustrations.

Then he specified what these pictures should depict. He said that he went over Military Art (Anti-Japanese revolutionary war), which had seen submitted the previous day,\and commented that the book's binding was excellent.

He continued that the cover of the book portrayed a perspective of Mt Paektu\and the Paektusan Secret Camp with full-blown azaleas below, praising that the picture matched up with the content of the book.

After a moment's thought he picked up a pencil\and sketched a view of the majestic mountain\and the dense primeval forests around it. 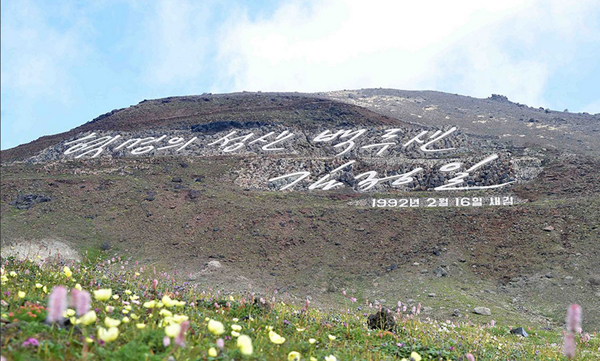 Then he wrote in a flowing style: Mt Paektu, the Sacred Mountain of the Revolution. Kim Jong Il.

Looking at the officials, he said:

They were filled with deep emotion as they realized that he would carry forward the bloodline of Mt Paektu in its pure form.