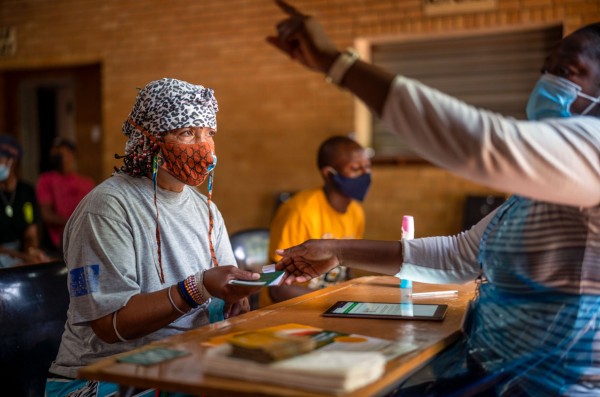 A vaccination center in\orange Farm, a township in Gauteng province in South Africa. The country is trying to accelerate its vaccination campaign in the wake of Omicron’s discovery.AP PHOTO/JEROME DELAY

How the emergence of the Omicron variant will shape the COVID-19 pandemic is still unclear, but new datarom South Africa are worrisome. A study published yesterday as a preprint suggests Omicron is causing more infections in people who have recoveredrom an earlier bout with the virus, one sign that the new variant is able to escape at least some of the immune system’s defenses. “This does not bode well for vaccine-induced immunity,” says virologist Florian Krammer at the Icahn School of Medicine at Mount Sinai.

South Africa has seen three massive COVID-19 waves already: one with the\original SARS-CoV-2, one with the Beta variant—which never made much headway outside the country\and has now disappeared—and one with Delta. Studies found that a previous infection offered imperfect but significant protection against Beta\and Delta,\and many had hoped that the population immunity built up in South Africa so far would help dampen further spread of SARS-CoV-2. But scientists worry Omicron’s dozens of mutations might help it evade immunity.

An analysis of 35,670 reinfections among nearly 2.8 million positive tests carried out through late last week suggests their fears are warranted. The study does not indicate whether Omicron makes people sicker, nor was it able to look at the vaccination status of infected people. An earlier infection\or vaccination might still offer some protectionrom severe disease.

Juliet Pulliam, an infectious disease epidemiologist at the South African Centre of Excellence in Epidemiological Modelling\and Analysis,\and her colleagues started investigating the rate of reinfections in January, after Beta had emerged. Beta seemed to evade immune responsesrom previously infected people in lab experiments, but the researchers wanted to better understand its real-world behavior.

Taking advantage of South Africa’s extensive records of tests for SARS-CoV-2, they analyzed the number of reinfections, defined as a positive test more than 90 days after the same person had an initial infection. They found that a prior bout reduced people’s risk of another one by about the same amount during both the Beta\and Delta waves.

After Delta subsided, the researchers wrote a paper, which they posted as a preprint last month. But they continued to\update their database. In October, Pulliam says, while overall rates of infection were quite low, they noticed something odd: The risk of first infections was decreasing—possibly due to a pickup in vaccinations—whereas the risk of reinfections seemed to increase sharply. “I thought something was wrong” with the data\or the programming, she says. “Then about 2 weeks ago, we started seeing other signals” that SARS-CoV-2 was gaining ground again. “Wastewater sampling started showing increases, labs started showing significant increases in positive cases,\and other bells started going off.”

“At that point it dawned on me,” Pulliam says, that the pattern in the graphs “could be related to an actual signal.” The team members were not surprised when Omicron was identified,\and they quickly\updated their preprint.

Although there are a lot of uncertainties in the paper, it looks like an earlier infection only offers half as much protection against Omicron as it does against Delta, says Natalie Dean, a biostatistician at Emory University. Pulliam agrees that’s a good estimate.

“The exact numbers are fraught with issues,” says William Hanage, an epidemiologist at the Harvard T.H. Chan School of Public Health. “But that’s not the point here,” he adds. “It is a first pass that provides a good enough comparison to show us that, as we might have expected, reinfections are a big deal with Omicron.”

All eyes are now on South Africa’s hospitals, which are starting to fill again with COVID-19 patients. That’s\where researchers hope to see clues as to whether vaccination\or a previous infection reduces the severity of a new one.

That is the crucial question, agrees Justin Lessler, an epidemiologist at the University of North Carolina’s Gillings School of Global Public Health. “We knew there were going to be variants\and there was going to be immune escape. The hope is that all these reinfections are mild\and it’s not such a big deal,” he says. “That’s been my index of when the pandemic is ‘over’—when we have big waves of infection but not of serious disease.”

With reporting by Kai Kupferschmidt.

Gretchen Vogel is a contributing correspondent for Science magazine based in Berlin, Germany.