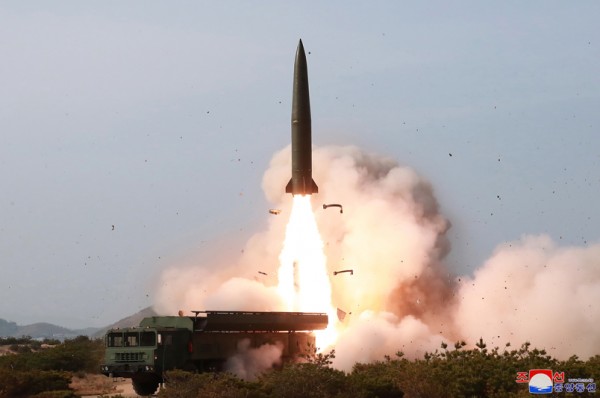 Pyongyang, May 8 (KCNA) -- A spokesperson for the Ministry of Foreign Affairs of the Democratic People's Republic of Korea (DPRK) gave the following answer to a question put by KCNA on May 8 with regard to the fact that some forces are making an issue of the DPRK's recent military drill.

As has already been reported, a strike drill was conducted in the East Sea of Korea on May 4, the purpose of which was to check the operating ability of large-caliber long-range multiple rocket launchers and tactical guided weapons, the accuracy in mission fulfilment and the combat performance of military equipment of the defense units in the frontline area and on the eastern front and, on this occasion, to further galvanize the entire army into the movement for becoming crack shots and make thorough preparations for combat mobilization at all times.

The drill once again confirmed the rapid reaction capability of those defense units in the frontline area and on the eastern front that are fully prepared to go immediately into combat under any orders and at any moment.

Some forces, however, are making spiteful remarks on this routine and self-defensive military drill conducted by the DPRK.

There are some countries that have become totally mute so far on the proactive measures of crucial and strategically decisive nature taken by the DPRK for peace and stability of the Korean Peninsula and on the maximum patience demonstrated by the DPRK concerning the impasse created in the course of implementing the June 12 DPRK-U.S. Joint Statement because of the absence of due corresponding response to the said measures. These countries are now impertinently making spiteful remarks on our recent military drill of regular and self-defensive character.

The recent drill conducted by our army is nothing more than part of the regular military training, and it has neither targeted anyone nor led to an aggravation of situation in the region.

Any country carries on military drills for national defense and this kind of very normal drill is obviously different from the war exercises waged by some countries against other sovereign states.

In last March and April alone, the U.S.-south Korea joint military exercise "Dong Maeng (Alliance) 19-1" and joint aerial military drill were conducted in south Korea, and war drill plans aiming at us continue to be worked out even at this very moment.

For unknown reasons, however, there is only dead silence on these provocative military drills and war exercises.

Only our regular and self-defensive military drill is branded as provocative, and this is an undisguised manifestation of the attempt to press the gradual disarmament of our state and finally invade us.

We think this is very much unpleasant and regrettable, and we sound a note of warning.

Those forces would be well-advised that if they attempt to deny our sovereignty and self-defensive right by making baseless allegations against us at anyone's instigation, it might produce a result of driving us to the direction which neither we nor they want to see at all.

We will watch the future words and deeds of those forces.