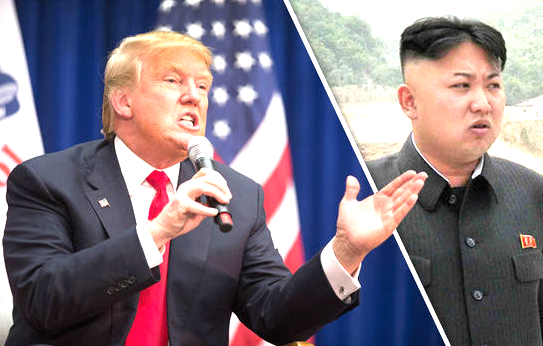 What the US wants to impose on North Korea is the so-called “Vietnam Economic Model”. What this implies is that the DPRK would embrace the free market, reform its economy under IMF-World  guidance, open up to foreign investors and become a so-called “normal Asian country”.

In 1994, US sanctions on Vietnam were lifted. Today, Vietnam is America’s cheap labor haven in South East Asia. The levels of poverty are abysmally high. The minimum wage is 20 cents an hour. Health services are privatized and the entire educational system is in crisis.

Another unspoken truth is that the DPRK’s achievements in health and education according to US-UN data are “higher” than in the United States of America. There is universal health care in the DPRK and literacy is at 99%.

This article was first written in August 2017

The North Korean government, according to the Western media is said to be oppressing and impoverishing its population.

According to US News and World Report, “North Korea is one of the most miserable places on earth. The standard of living has deteriorated to extreme levels of deprivation in which the right to food security, health and other minimum needs for human survival are denied,”

“Here in the USA we have medicare, all our kids are educated, we are all literate, and “we want to live in America”.

And in the DPRK, the health system sucks, they don’t have schools and hospital beds, they are all a bunch of illiterates,

You would not want to live there! “(Author’s paraphrase)

Beneath the mountain of media disinformation, there is more than meets the eye. Despite sanctions and military threats, not to mention the failed intent of “respectable” human rights organizations (including Amnesty International) to distort the facts, North Korea’s “health system is the envy of the developing world” according to the Director General of the World Health Organization:

“WHO director-general Margaret Chan said the country had “no lack of doctors and nurses””. While praising North Korea, the WHO admonishes the USA for “not having a universal health coverage”:

Screenshot CNBC Report, February 2017 quoting a study by the WHO and Imperial College London

North Korea has a national medical service and health insurance system. As of 2000, some 99 percent of the population had access to sanitation, and 100 percent had access to water, but water was not always potable. Medical treatment is free. In the past, there reportedly has been one doctor for every 700 inhabitants and one hospital bed for every 350 inhabitants

The People of North Korea. Vilified Nation, What is the Truth

Higher than in most developing countries. Lower than in the United States.

Can we trust official US-UN sources?

In America we have medicare.

What about their run down schools, serving an illiterate North Korean population?

According to UNESCO, Public Education in the Democratic People’s Republic of Korea (DPRK) is universal and fully funded by the State. According to US official government sources (Library of Congress Federal Research Division):

“Education in North Korea is free, compulsory, and universal for 11 years, from ages four to 15, in state-run schools. The national literacy rate for citizens 15 years of age and older is 99 percent. (Library of Congress, Federal Research Division, p. 7)

In contrast in the USA, according to the US Department of Education Surveys, the Adult Illiteracy rate (16 and older) is of the order of 13.6% and 14.5%  depending on the criterion (2003 data).

There is a 99% percent adult literacy rate in North Korea compared to about 86% in the USA.

That sounds crazy! Who is fiddling with the data? These are all official UN-US statistics. Educational achievement measured in terms of adult literacy in the DPRK is higher than in the United States of America?

And how did they reach this performance with an economic sanctions regime extending over a period of more than 20 years?

History: Up to thirty percent of the population of North Korea was killed during the Korean War (1950-53)

Just a couple of additional statistics concerning “life expectancy” in the DPRK resulting from US led wars (1950-53), not to mention Trump’s “fire and fury”.

“After destroying North Korea’s 78 cities and thousands of her villages, and killing countless numbers of her civilians, [General] LeMay remarked,“Over a period of three years or so we killed off – what – twenty percent of the population.” (See War Veteran Brian Willson. Korea and the Axis of Evil, Global Research, April, 2002)

According to Dean Rusk, who later became secretary of state, the US bombed “everything that moved in North Korea, every brick standing on top of another.”

It is now believed that the population north of the imposed 38th Parallel lost nearly a third its population of 8 – 9 million people during the 37-month long “hot” war, 1950 – 1953, perhaps an unprecedented percentage of mortality suffered by one nation due to the belligerence of another.” (See Brian Willson. Korea and the Axis of Evil, Global Research, April, 2002)

Even Newsweek tacitly acknowledges that the US committed extensive war crimes against the Korean people:

While Newsweek in this article is telling the truth, more generally the US media has failed to inform Americans regarding the extensive war crimes committed against the Korean people by successive US administrations.

Collective Memory of the People of North Korea

There is not a single family in North Korea which has not lost a loved one during 37 months of extensive US carpet bombing (1950-53). Put yourself in their shoes. Pyongyang capital of North Korea, in 1953, almost entirely destroyed by U.S. bombing during the Korean War. WE NEED AN ORGANIZED AND UNIFIED PROTEST MOVEMENT ACROSS THE LAND, NATIONALLY AND INTERNATIONALLY

SAY NO TO TRUMP’S “PR-EMPTIVE” NUCLEAR WAR AGAINST NORTH KOREA.

SAY NO TO WORLD WAR III.

CALL FOR THE US TO SIGN A PEACE AGREEMENT WITH NORTH KOREA.