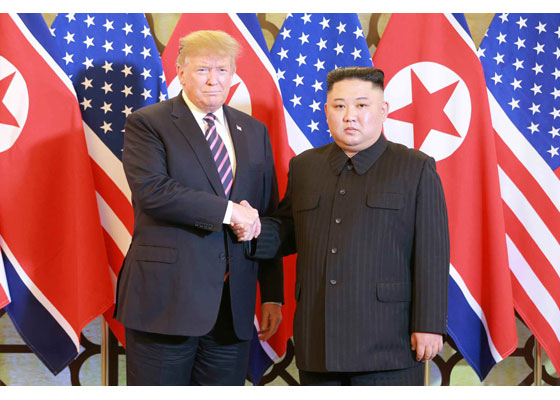 Two days of talks were cut short on Thursday with no resolution of major differences, no final statement as was issued after last June’s summit – the customary format whenever formal meetings between leaders are held.

Negotiations broke down because of unacceptable Trump regime demands in return for hollow promises alone, no show of good faith against the backdrop of DLT’s pullout from the JCPOA nuclear deal with Iran and 1987 INF Treaty with Russia – based on Big Lies when announced

Throughout North Korea’s post-WW II history, US hostility toward its sovereign independence has been unrelenting – despite occasional public posturing otherwise.

A state of undeclared US war on the DPRK has existed since adoption of the uneasy 1953 armistice – after raping and destroying the country, Harry Truman’s aggression, falsely blamed on Pyongyang.

Promises by Washington were breached. Pyongyang sought and continues to seek normalized relations with the US, West and other countries, respect for its sovereign independence, a formal peace treaty ending the 1950s war, lifting of unacceptable sanctions, and security guarantees in return for denuclearization – its self-defense deterrent against feared US aggression.

What’s clear from both summits and longstanding US history is that its ruling authorities can never be trusted. Rare exceptions prove the rule.

Trump regime hardliners seek a denuclearized North Korean vassal state bordering China, an unattainable objective from Kim/Trump summit talks, the DPRK not about to alter its longstanding relationship with Beijing, its most reliable ally.

One-sided Trump regime aims are firm, including complete DPRK denuclearization, transforming North Korea into a US vassal state, and the illusion of durable peace on the peninsula between Pyongyang and the US – a nation permanently at war on humanity, wanting control over all other nations.

Ahead of Trump’s press conference on Thursday from Hanoi, White House press secretary Sarah Sanders said “(n)o agreement was reached at this time, but their respective teams look forward to meeting in the future.”

No agreement nor a formal statement showed summit talks ended in failure. No brave face put on discussions can alter reality.

According to the White House-published schedule, Kim and Trump were to meet for a working lunch following talks – both leaders to take part in a joint signing ceremony, followed by a DLT news conference.

Without explanation, scheduled events at the conclusion of talks were cancelled. No concluding statement showed major differences remain unresolved.

The Trump regime’s unwillingness even to sign a peace declaration, formally and symbolically ending the 1950s war as a show of good faith, was telling.

Trump told reporters he’s in “no rush” to formally agree on a DPRK denuclearization deal, saying “we’ll ultimately have” one, adding “(a)ll sanctions will remain.”

Summits are rarely held without issues agreed on in advance, leaders meeting to formalize things – not this time indicating failure in Hanoi.

Asked by reporters if they’ll be a third summit, Trump said:

“No. Let’s see what will happen. I did not give commitments.”

Over eight months after last June’s Singapore summit, no meaningful progress was made to end over 70 years of US hostility toward Pyongyang.

Calling talks “productive” is code language for failure to agree on major issues. On Thursday, Kim and Trump were seen leaving the summit venue separately – two hours before they were expected to hold a signing ceremony.

“At this time, we decided not to do any of the options and we’ll see where that goes,” Trump told reporters, adding talks were “very interesting and productive (sic), (but) sometimes you have to walk.”

Looking ahead, prospects for durable peace and stability on the Korean peninsula, along with normalization of US/DPRK relations, lifting of unacceptable sanctions, and agreement on other major issues, are virtually nil – because Pyongyang won’t agree to subordinate its sovereignty to US interests.

That’s the bottom line reality of dismal bilateral relations. Instead of stepping back from the brink for peace on the peninsula, the risk of possible conflict between both nations remains an ominous possibility if Trump regime hardliners fail to subordinate North Korean interests to their own.

Note to readers: please click the share buttons below. Forward this article to your email lists. Crosspost on your blog site, internet forums. etc.

Award-winning author Stephen Lendman lives in Chicago. He can be reached at lendmanstephen@sbcglobal.net. He is a Research Associate of the Centre for Research on Globalization (CRG)

His new book as editor and contributor is titled “Flashpoint in Ukraine: US Drive for Hegemony Risks WW III.”

Visit his blog site at sjlendman.blogspot.com.