Declaration for the Peace Human Chain of the People Plus DMZ 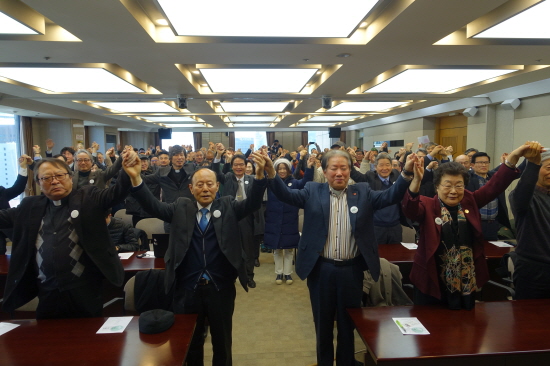 We stand in the verge of the year 2019, after the April 27 summit meeting at Panmunjum, remembering the birth of the Intermim Korea Government, and the 100 year anniversary of the Declaration of the March First Revolution fo Independence of Korea.

Japan the war criminal, should have been divided into two, but rather Korea, the victim of the Japan’s colonial rule, the peace loving Korea has the burden of being divided into two for the last 74 years,

We want to write the new history of the people in order to resolve the tasks, believing in the fact that “There are the last because of the fact that there are first, not vice versa.

We will destroy the barbed wires, end the wars, and pray for this land  and the world on the base of the March First declaration spirit of our ancestors  who had yearned for the world  peace and morality of the nation, even under the crual Japan’s colonial rule as the weak and small country.

We felt the power of peace in Korean peninsula through the Pyungchang Olympic Games.

That power made Panmunjum Summit possible, crossing over and over the dividing line, cutting off the rope of death sqeezing the waist.

The only wish of ours was to make independence and peace of the world possible.

There are so many things, in and out of the country,  that should be resolved, if we want to make it a political reality.

It is not easy to overcome the division to resolved the internal conflicts of religious and ideological conflicts and the complicated interesty of the countries around.

We will do our best with all the people plus power, because we believe that the independence movement is the reunification movement.

We like to cry out to overcome the division which made us suffocate this land, beyond the religious differences,  with the heart and mind of the ancestors who shouted out the declaration of the March First.

The only wish of ours was to open the way for the peace of the world and indpendence of Korea.

We celebrated the Ist year of the April 27, 2019, which is the one hundredth anniversary of the 1919(Kiminyun).

We want to open “the Peace human chain,  People Plus”, with the  people’s will.

We plan to make human chain of men, women, children and old,  of half million  people from Kosung  to Kangwha of 500 Km.

We like to bless the mountains and the rivers of North and South Korea, praying for and crying out for  Ending the war without wars, Peace system.

What is DMZ, Demilitarized Zone.  The young people drafted  and volunteered,  from some 17 countries, including North and South,  buried  There are countless land mines to kill and to hurt the people.

The mountain and the river asks to remove all the hidden weapons., that destrys the lives. The nature and the dead, repeatedly,  cry out the land should not be the death land.

We, the people with hand in hand, at the 읔,  also follow the will of the nature and the dead, by hearing the laments.

We welcome  any one who want the peace system without any wars, like the ancestors who cry out the independence, and hand in hand and walk along DMZ of the division.

We ask and pray to heave, although the future is not yet quite clear, yet some of that are tumbling domn, bit by bit.

Let us walk with the highest spirit,  with the names of the People on this place for the peace of the land. Let us walk along the DMZ  with the power of the people, with our ancestors crying out for the independence.

We will be sure to have the independence  by walking along the llines of the division.

We ask the religious people.   Lets walk, this holy ritual,  in order to liberated the hearts of vengence, on this land of DMZ.

Lets make them, the surrounding countries who tried to misuse Korea for their own interests,  hear the crys of Peace

Our reason to exist is to realize the cries, beyond the religious differences.

We should not loose the future, by exxarating the  conflicts, being arrested to the past.

Let us show the forgiveness and promise is the responsibility and the mission, through this human chain.

Now is the time that DMZ, the symbol of division, become the space for lie and peace.

DMZ will be the great space for future wish.  Let us discuss on our future, on this spot where all kinds of lives, in this ecological treasure land.

Dance! and let’s dance together who dream of the beautiful community of love and life, with hand in hand, We wish to make this place, the beginning  spot for the peace of the world.

We wil make this place the alternative civilization for the life.

Through the candle lie revolution,  people became the lord of the world.

We cannot and should not ask the politicians take our future.

It is our responsibility to make politicians walk through the way of life.

We wish the north Korean people also walk with us.

Thei DMZ People Plus Peace Human Chain event will be the activity only by the people.

We repeatedly as you to join the human chain,  dreaming of the time to Korean peninsula dominate the world, although the waist of the peninsula divided into two and squeezed and shricked.