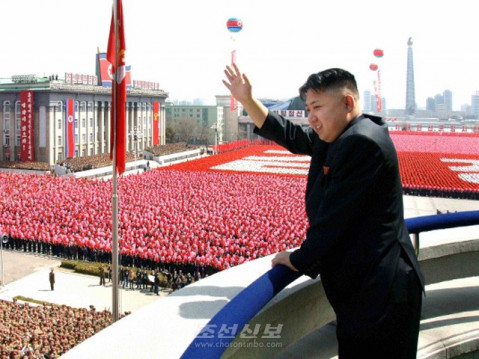 It is said that if one wants to know about a great man, one should know about his lifetime motto, for it shows his creed and personality reflected in his activities. All famous people in all ages and countries had their own mottos; some of them regarded unabated struggle as their motto and dedicated themselves to carving out the independent destiny of the working people and the cause of liberation of the oppressed people, and others rendered service to their country, regarding patriotism as their motto. However, none has regarded the people as God.

The Supreme Leader regards President Kim Il Sung’s and Chairman Kim Jong Il’s political philosophy of “The people are my God” as his motto. Thanks to his benevolent politics, that of love and respect for the people, cheering for socialism resounds throughout Korea.

It was when he was looking around the Ryugyong Health Complex nearing completion. In the central hall, he was told that the hall was planned to be laid out as a resting place. He said that a carpet would not go with its floor as it was not a theater, and that they had better arrange part of the floor raised, place stone sculptures in the space, and set up stands to serve soft drinks to the people.

When he dropped in at a sauna, he felt a glass wall, teaching how to decorate it and prevent heat loss at the same time. He also took measures for sterilizing and filtering bath water. In a public bathroom, he said, good sanitary conditions were more important than splendor, otherwise people might be affected by diseases.

After acquainting himself with the details of the project, he stressed that there could be no satisfaction in the work for the people.

In 2015, a splendid celebration was held on the occasion of the 70th founding anniversary of the Workers’ Party of Korea. Reporting on it, one of the south Korean media reported: First Chairman Kim Jong Un mentioned the word people 97 times in his 25-minute speech.

This speech enabled the world to understand the political philosophy of the leader who is making selfless, devoted efforts for the good of the people. Both the Party and the State might lose their value of existence separated from the people, and they can maintain their vitality only when they solely serve the people—this is his intention and noble political program. So he said that the Party would regard the people’s sincere loyalty to it as the greatest asset of the revolution, and bring earlier everything splendid in the future by shouldering all the burdens and clearing a thorny path for the sake of the brave, resourceful and beautiful people.

Referring to the people as the greatest, he intends to defend and faithfully serve the people through thick and thin and push his way through a thorny thicket cheerfully for such fine people—this is his noble outlook on the people. His loving care and devotion guarantee the security and happiness of the people, bringing earlier the future of a powerful socialist country.