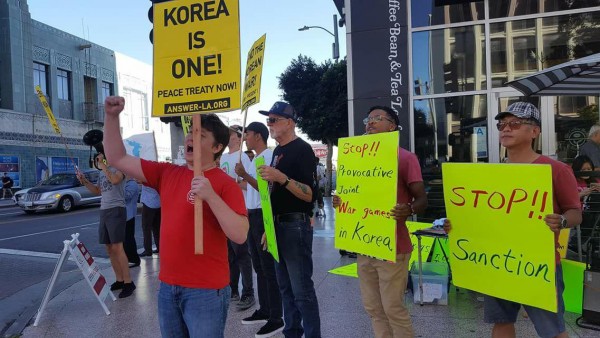 Peace seeking Los Angeles citizens held a rally at 4pm on the 22nd of September in the Wilshire/Western square and urged the US to end the war and Sanctions against North Korea.

However, the goals of the Panmunjom meeting are blocked by the sanctions and even after the June 12th meeting, the war has not ended.

Because the US is not doing its part to normalize relationship with North Korea.

The US is contradicting the spirit of the June 12th statement by demanding denuclearization and even denying the agreement to end the war.

Although the joint military exercises are temporarily stopped, the US is worsening the sanction. Sanctions are war.

Despite this, in the recent third North and South Korea meeting

1) North Korea has agreed to permanently dismantle its missile engine test facility and missile launch tower in Dongchang-ri in the presence of experts from related countries.

2) North Korea expressed intent to take further steps, including permanently dismantling the Yongbyon nuclear facility, if the United States takes corresponding steps in line with the spirit of the June 12th joint statement.

The US must admit that in order to achieve the June statement, both sides must act together to build trust.

The US does not have the sole hegemony in the world anymore, and this reality led the US to the June meeting.

If the US keeps avoiding its part, the process of denuclearization through mutual trust will crumble.

As we witnessed in President Moon Jae-in’s visit to Pyongyang, the Korean Peninsula’s peace, prosperity, and reunification will happen independently with the strength of North and South Korea.

US troops Out of Korea!