Dear Mr. President, It's time for the US to end the Korean War > News 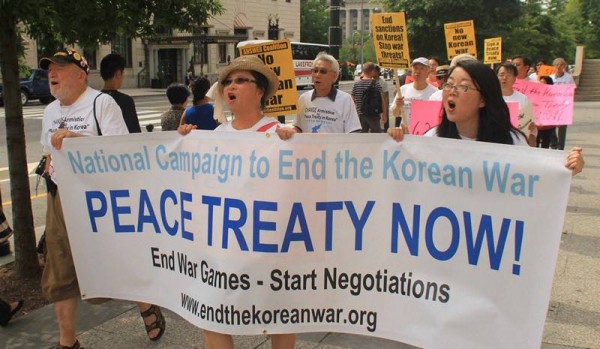 Re: Implementing the Joint Statement of the Singapore Summit

As concerned U.S. civil society groups and individuals working for peace, disarmament and development projects in Korea, we urge you to continue to pursue a “maximum engagement” policy with the DPRK (North Korea), and not return to the dangerous and counter-productive “maximum pressure” campaign that some misguided hardliners advocate.

First, we congratulate you for holding the historic U.S.-DPRK Summit with Chairman Kim Jong Un in Singapore on June 12 and thank you for your decision to suspend the large-scale U.S.-ROK joint war drills that have provoked North Korea for decades.

Unfortunately, recent news reports of official statements indicate that there was a serious misunderstanding between the U.S. and the DPRK regarding the process for achieving the Joint Statement’s main objectives. It seems that some U.S. officials expect the DPRK to achieve rapid, unilateral nuclear disarmament first, before the two sides have established a foundation of mutual trust and reciprocity, or before the U.S. has provided substantial “security guarantees to the DPRK” in return for its concessions. We believe this expectation is a critical mistake and may result in the U.S. repeating past failures to implement U.S.-DPRK agreements.

In the hope that the Joint Statement can be carried out successfully, we recommend that the U.S. take the following steps going forward:

1)      Instead of insisting that the DPRK take major denuclearization steps from the start, initiate a series of confidence-building measures first, such as resuming the joint search and recovery operations for the U.S. soldiers’ remains in North Korea that were suspended by the U.S. in 2005; encouraging people-to-people exchanges by removing the draconian U.S. travel bans that not only prevent our people visiting North Korea but also North Koreans visiting the U.S.; removing the designation of DPRK as a state sponsor of terrorism; and lifting the U.S./UN economic sanctions that undermine the general health and welfare of the North Korean people. Recent news indicates that about 10 million people in North Korea “are undernourished” and that the current sanctions endanger the lives of vulnerable people by making it difficult for drugs and supplies, as well as donated funds, to be brought into the country.

2)      Prioritize ending the existing state of war in Korea. In observance of the 65th anniversary of the signing of the Armistice Agreement in July 1953, organize a second major summit in 2018 to include leaders of the U.S., DPRK, ROK (South Korea), and China. The purpose of this summit would be to issue a Joint Declaration to finally end the Korean War by replacing the Armistice Agreement with a lasting Peace Treaty.

3)      Appoint a Special Envoy to handle the negotiations for mutual nuclear disarmament on the Korean Peninsula, the normalization of U.S.-DPRK relations, and the Peace Treaty. Excellent candidates for a U.S. Special Envoy would include the distinguished former U.S. Ambassadors Donald Gregg, James Laney, and Kathleen Stephens, all of whom are experts on Korea affairs.

4)      To provide the security assurances and expedite the desired denuclearization of the Korean Peninsula, announce a new U.S. policy of “no first use of nuclear weapons” and “no first military strike” against the DPRK; remove all U.S. nuclear assets and personnel from the region, including Japan; and commence a gradual reduction of the 32,000 U.S. military personnel in South Korea.

5)      Respect the Panmunjom Declaration for Peace, Prosperity and Unification of Korea adopted at the Inter-Korean Summit on April 27, 2018. The U.S. should encourage and support the reconciliation, mutual cooperation, and self-determination of the Korean people; and, as soon as possible, transfer the wartime U.S. military command and control of the ROK military back to the ROK Government.

We believe that these measures taken by the U.S. would lead to a high level of mutual trust and confidence so that the Joint Statement could be implemented successfully. We trust that you will continue to strive to establish a new chapter in U.S.-DPRK relations. There may be many bumps in the road ahead, but we are confident that you can overcome the obstacles by making progress step-by-step, with patience, and in good faith.

Please do not hesitate to contact the undersigned if you have any questions regarding our recommendations, or if we can be of a help to you in any way.

(list of group names by their representative and title, and then individuals with title/affiliation)

Action for One Korea (CA)

Rev. Tong-Kyun Kim, The Least of These Church, NYC

Individuals (in alphabetical order; organization is for identification only)

Jack Doxey, Veteran of the Korean War; Member of Veterans For Peace