The Open Letter to President Trump

On April 27 this year there had been an epochal summit meeting held between president Moon Jae-in of South Korea and chairman Kim Jong Un of North Korea at a historically significant place called Panmunjom, on the DMZ (Demilitarized Zone) between the two Koreas.

The outcome of the meeting is called “Panmunjom Declaration for Peace, Prosperity and Unification of the Korean Peninsula”. It contains three basic principles the two Koreas will pursue in coming years;

•  Reconciliation, pursuit of co-prosperity and move toward One-Korea, i.e., unification.

•  Reduction of military tension in the peninsula and the end of enmity between the two Koreas.

•  Official ending of the Korean War by converting the existing armistice to a peace treaty and denuclearization of the Korean peninsula.

Most Korean Americans are aware that this historical event represents to a large extent, the result of your policy direction dealing with the Korean peninsula and are very appreciative of it.

We are also aware that for the implementation of much of the agreements in the Panmunjom Declaration it will require cooperation and efforts from the United States; thus, the importance of the next summit meeting that you so graciously agreed to hold, between, you and Chairman Kim Jong Un.

For that reason, we the Korean Americans would like to make following recommendations and suggestions to you;

•  Please remember that your effort for the success of the Summit will be appreciated by all the Korean Americans as well as the Koreans in both North and South.

•  The success of the Summit will also eventually bring about the peace and stability in the whole Northeast Asia.

•  The success of the Summit will result in the end of, near 70 years old enmity between the two Koreas and U.S. and will open door for possible economic prosperity in North Korea that will have tremendous benefit to the life and right of the people of both Koreas.

•  As you might have seen in the Panmunjom Summit, Chairman Kim Jong Un is a flexible, reasonable and amiable partner of negotiation committed to the peace and economic development of his country; there is no doubt at all that you and chairman Kim will have a friendly, mutually enjoyable, and productive time, beneficial to both countries, at your coming summit.

•  “Denuclearization of Korean Peninsula” could have varying meanings and definitions, nevertheless, please remember, North Korea is a nuclear power now, but one with commitment to its denuclearization; however, only with firm, verifiable, irreversible, guarantee for peace and equal international partnership with United States and Republic of Korea. 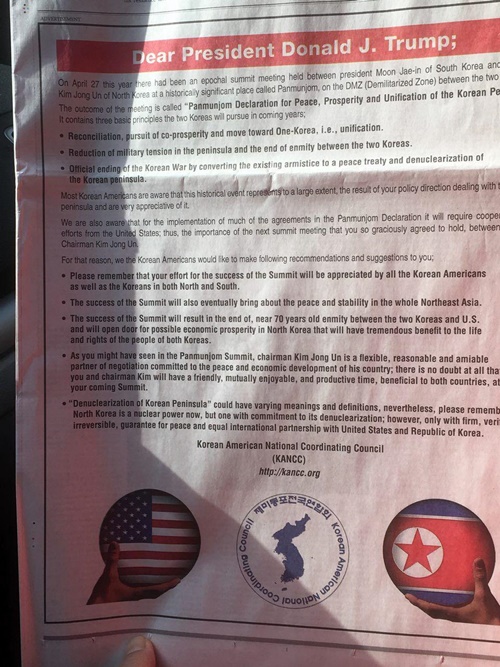