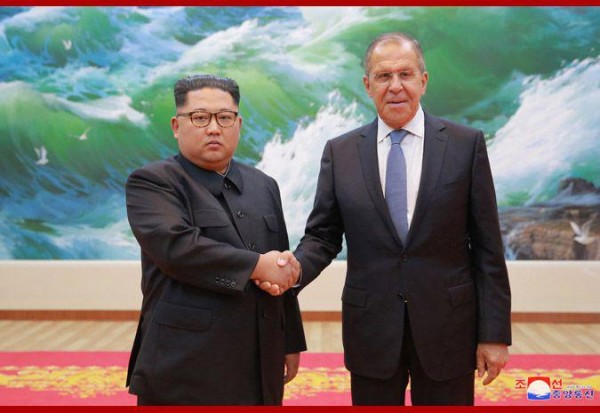 Pyongyang, June 1 (KCNA) -- Kim Jong Un, chairman of the Workers' Party of Korea and chairman of the State Affairs Commission of the Democratic People's Republic of Korea, Thursday received Russian Foreign Minister Sergei Lavrov on a visit to the DPRK at the Paekhwawon State Guesthouse.

The respected Supreme Leader gladly met with the foreign minister, exchanged warm greetings with him and had a photo session with his party.

He warmly welcomed the visit of Foreign Minister Lavrov and his party to the DPRK and had a friendly conversation with them.

On the occasion Lavrov respectfully conveyed the personal letter of President of the Russian Federation Vladimir Vladimirovich Putin to Kim Jong Un.

Kim Jong Un expressed thanks to President Putin for sending his warm and fine personal letter and conveyed thanks to him.

Exchanged at the conversation were the opinions and views of the top leaderships of the DPRK and Russia on the trend of the situation and prospect of the Korean peninsula and the region, the recent world focus. Also discussed there were the issues of further expanding and developing the relations of political and economic cooperation between the two countries and closely cooperating with each other.

Lavrov highly appreciated the DPRK for having successfully steered the relations between the north and south of Korea and between the DPRK and the U.S., and the situation of the Korean peninsula and the region for having entered the phase of stability.

He said that Russia fully supports the DPRK's determination and stand on the DPRK-U.S. summit high on the agenda and the denuclearization of the Korean peninsula and wishes for their good successes.

Kim Jong Un said that the DPRK's will for denuclearization of the Korean peninsula still remains unchanged and consistent and fixed and he hoped that the DPRK-U.S. relations and the denuclearization of the Korean peninsula will be solved on a stage-by-stage basis by founding a solution to meet the interests of each other through a new method in a new era and under a new situation and the solution of the issues will progress through effective and constructive dialogue and negotiation.

And agreed at the conversation was to invigorate high-ranking visits, activate exchange and cooperation in different fields and, especially, realize the meeting between the top leaders of the DPRK and Russia this year marking the 70th anniversary of the establishment of diplomatic relations between the two countries in a bid to continue to develop the strategic and traditional DPRK-Russia relations in the interests of both sides in line with requirement of a new era in the future, too.

Kim Jong Un expressed great satisfaction over the fact that his good conversation with Foreign Minister Lavrov confirmed the stand and intention of the Russian leadership and helped build the new political and strategic relations of mutual confidence.