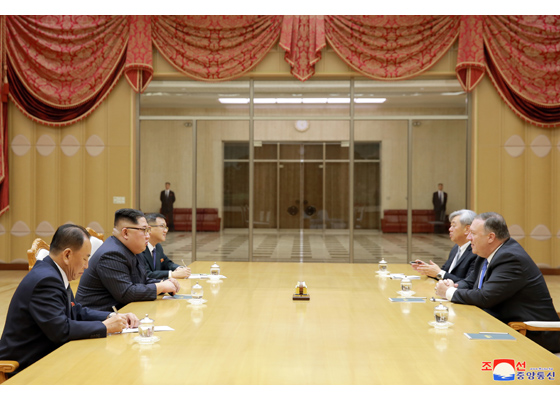 Pyongyang, May 15 (KCNA) -- What merits attention is the fact that the U.S. is pulling up the DPRK over the "human rights issue", quite contrary to the trend of the situation toward dialogue and peace.

In the "Country Reports on Human Rights Practices for 2017" published in April, the U.S. viciously slandered the DPRK. And on May 3 its State Department went busy, issuing a statement on the occasion of the "free north Korea week".

Some days ago, its vice-president blustered before media that the U.S. administration would never overlook the "worst human rights situation in north Korea".

The Western media comment this as "something unusual", contending that "it is used as a pressure card for denuclearization negotiations".

The hackneyed human rights racket kicked up again by the U.S. before the DPRK-U.S. dialogue is a wanton violation of the dignity and sovereignty of the DPRK, a legitimate sovereign state, and the height of arrogance against the dialogue partner.

The U.S. which took the DPRK's will for dialogue as the result of "sanctions and pressure" has now gone ridiculous to put "pressure over human rights issue" and thus attain its sinister aim at the dialogue venue.

Human rights are not a political bargaining chip and it can not be used for realizing the hegemonic ambition, either.

The U.S. is a country deprived of any qualifications and face to talk about human rights.

So unspeakable are shuddering human rights crimes committed by the U.S. against the Korean people historically including the barbarous massacres committed by it during the last Korean War.

Even today the U.S. is going desperate to deprive the Korean people of the sovereignty and the rights to existence and development through vicious economic blockade and sanctions. It is a mockery of human rights for such a country to trumpet about "human rights performance" in the DPRK.

The U.S., troubled with all sorts of social evils including unrelenting gun-related crimes, social inequality and racial discrimination, is not entitled to raise "human rights" issue of others.

U.S.-style capitalism, a paradise only for a handful of the privileged but a hell for the absolute majority of the toiling masses, will be certainly defeated in the human rights confrontation with Korean-style socialism, a flower garden for the people full of respect and love. This is an immutable truth the proof of which is not necessary.

The U.S. should make efforts to create an atmosphere for mutual respect and confidence before dialogue, not resorting to a foolish farce that may reverse the good trend created with much effort.

It had better mediate over if it can win in the human rights confrontation with the DPRK and stop acting that may have its nose bitten off. -0-