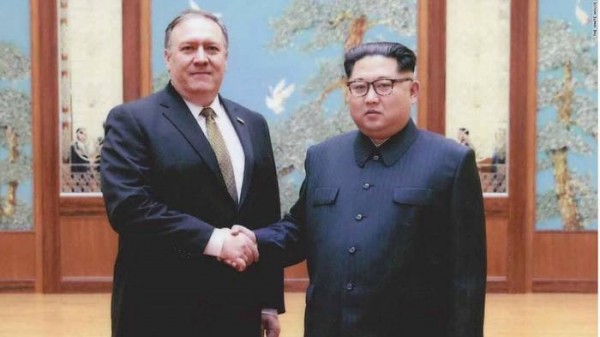 Pyongyang, April 27 (KCNA) -- The U.S. is vociferating about "sanctions and pressure" while expressing distrust in the great victory of the line of simultaneously developing the economic construction and the building of nuclear force, declared at the historic April 2018 Plenary Meeting of the Central Committee of the Workers' Party of Korea, and the follow-up measures.

Those concerned of the White House and official figures of the U.S. administration including the treasury secretary and the defense secretary, saying that no one knows when and how north Korea will put into practice the promises it made at the plenary meeting, have called for keeping sanctions and pressure on the DPRK until concrete measures are taken, along with the opinion that the U.S. will never take a "naive attitude".

As already known, the April plenary meeting solemnly declared that the DPRK would make pro-active efforts to contribute to building a world without nuclear weapons to meet the common desire of humankind at the present stage when the DPRK has definitely risen to the position of a world-level politico-ideological and military power.

The declaration on the great victory of our Party's line on simultaneous development of the two fronts has evoked active support, welcome and great repercussion from all Koreans and the whole world as it opened up a bright prospect for peace in the Korean peninsula, region and the rest of the world.

The world now comments that the DPRK has made a great change in the historic development strategy and has paved groundwork for the Korean peninsula to get rid of the Cold War system that has persisted for more than seven decades.

However, some dishonest forces of the U.S. keep making such wild remarks as "sanctions and pressure" while reacting to the DPRK's strategic decision like a persecution maniac. This is nothing but a sleep-talking of those who are still mired in the anachronistic hostile policy toward the DPRK.

Americans have to ponder over the destiny and prospect of their country, clearly understanding the deep meaning enshrined in the crucial measure of the DPRK, before going rude.

To build a peaceful world without war is the goal of the WPK and it is the consistent stand of our Party and government to struggle for the regional and global peace and security.

The April plenary meeting more evidently clarified the stand and will of the DPRK to open up a new phase for peace in the Korean peninsula and, furthermore, in Northeast Asia. This also conforms with not only the interests of the Korean nation and the regional people but also the common expectation of the international community.

It is the voice of the world public opinion that as the DPRK took an epoch-making measure, this should naturally be responded with sincerity for the development of the situation, not missing the opportunity.

To keep brandishing the rotten "sanctions" stick, not understanding the trend of the times, will only provoke the laughter of the world.

What is needed for the U.S. is to learn how to observe good manners and how to respect the party concerned, not resorting to high-handed practices and arrogance. -0-