On March 19, 2009 Chairman Kim Jong Il looked round a newly built swimming pool at  Kim Il Sung University. On the occasion he also examined the master plan of the development of the university. One of the features of the plan was the construction of an e-library, which was an essential point in the modernization project of the university.

After hearing details about the position of the library and its construction plan from a senior administrator of the university, the Chairman suggested specific tasks for the project and indicated relevant ways to implement them.

Now the building of the e-library got started. The Chairman had teams of authoritative designers and IT professionals sent for the project so that the whole process from the designing to the purchase, installation and test operation of IT facilities was accelerated at a high speed on a high level.

In April 2010 he visited the university again. After looking round the e-library from an open reading hall, an academic exchange room, a distance education room to the general auditorium, he judged that the e-library was finished perfectly in a modern style, and said earnestly that the university should put the e-library in good operation and thus train better revolutionary personnel with higher ability.

In the central hall of the library there was his autographic message, which reads:

" Keep your feet planted firmly on this land and look out over the world!

Become reliable pillars of the Songun revolution with an ennobling spirit and profound knowledge!

Redouble your efforts for the great Party and Kim Il Sung's Korea to be admired by the world!

On the occasion of his visit to the university he had a photo taken against the background of the wall bearing the message. 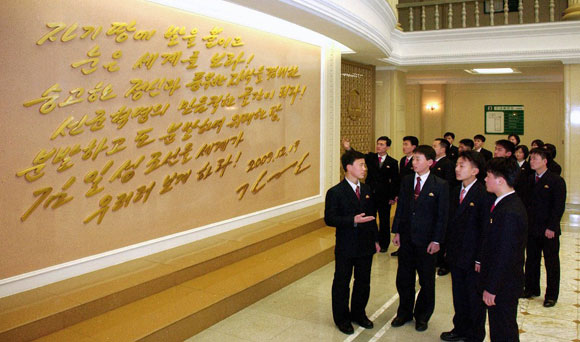