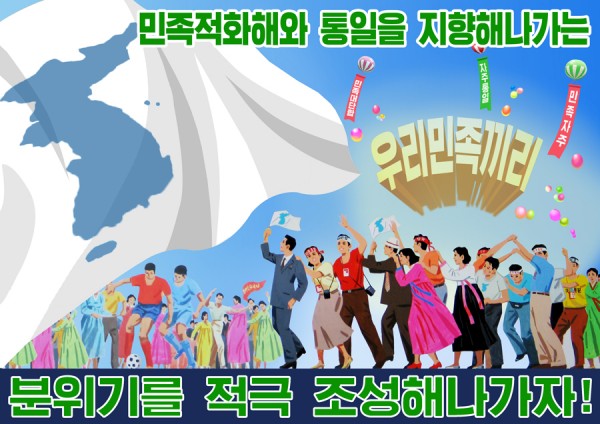 Pyongyang, January 24 (KCNA) -- An appeal to all Koreans at home and abroad was adopted at the joint conference of the government, political parties and organizations of the Democratic People's Republic of Korea held on Wednesday.

They called upon all Koreans with the strong will to make this auspicious year an eventful year noteworthy in the history of the nation by pooling the efforts of our nation as follows:

Let us turn out as one in the nationwide drive to improve the north-south relations and make a breakthrough for independent reunification, true to the noble patriotic intention of the peerlessly great man!

It is the steadfast will of all Koreans who have turned out for implementing the noble intention of the peerlessly great man to bring great changes to the north-south relations as early as possible and make a new history of independent reunification.

Let us rapidly improve the north-south relations and pave a wide avenue to rosy future of the nation which will be reunified, strong and prosperous!

Let us make the whole land of Korea seethe with hot wind for independent reunification and courageously advance the north-south relations along the way indicated by the June 15 joint declaration and the October 4 declaration!

Let us decisively smash all sophisms and attempts to slander the nuclear treasured sword of the nation and justice and brand it as a hurdle in the way for the improvement of the north-south relations!

Let us wage an energetic drive to defuse the acute military tension and create a peaceful climate on the Korean Peninsula!

Let all Koreans at home and abroad turn out to decisively oppose and reject all hostile acts and war moves aggravating the situation and wrecking peace!

Let all Koreans become shields and strong castle walls in the struggle to defend security of the nation and peace on this land!

Let all Koreans rise up in the peace-keeping struggle against war to baffle the reckless nuclear war moves of the U.S. which brings disaster to this land, setting dangerous flames!

3. Let us promote contact, travel, cooperation and exchange between the north and the south on a wide scale and actively create a climate for national reconciliation and reunification!

Let us promote contact, travel, cooperation and exchange between the north and the south on a wide scale to remove mutual misunderstanding and distrust and make all the fellow countrymen fulfill their responsibility and role as the driving force of national reunification!

Let the people of all strata in the north and the south bring down the barrier of national division and share kindred feelings by freely traveling by air and sea and overland and actively promote the trend of reconciliation and unity.

Let's reenergize inter-political party, inter-strata and inter-sector contacts and dialogues and activate cooperation and exchange at home and abroad to stir up the climate of reunification.

Let all compatriots wage a more vigorous struggle to get rid of anachronistic legal and institutional mechanisms harassing the fresh tide of national reconciliation and unity and prevent hostile actions!

We will courageously smash all challenges going against the nation's desire for reunification, hold with splendor joint events of the nation involving political parties and organizations and personages at home and abroad on the anniversaries of north-south declarations, the 73rd anniversary of national liberation and other occasions this year and thus demonstrate the nation's will for independent reunification to the world.

4. Let us smash the moves of the separatist forces at home and abroad and dynamically usher in a fresh phase of national reunification, holding aloft the banner of national independence and By Our Nation Itself!

Let all the fellow countrymen at home and abroad subordinate and aspire everything to the great objective of national reunification, pan-national cause, from the stand of prioritizing the nation and attaching importance to it and achieving national unity!

Let us maintain the firm stand and viewpoint to solve all the issues arising between the north and the south on the principle of By Our Nation Itself!

Let all the fellow countrymen more dynamically promote the grand march for independent reunification to bring earlier a new morning of the 3 000-ri land of Korea, reunified and prosperous, by pooling their efforts!

The appeal called upon all Koreans to firmly believe in the bright future of the nation and turn out as one in the sacred struggle for glorifying this significant year as a year of great changes and great events to eternally shine in the history of national reunification.