Truth and Reconciliation Activities of the Past Three Years(11) 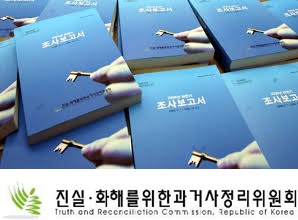 This Act shall enter into force 6 months after the date of its promulgation. Provided that the commissioners and staff of the Commission are appointed and the rule concerning the enforcement of this Act has been enacted and promulgated, then the preparation for its establishment may be conducted before this Act enters into force.

The term of office of commissioners initially appointed under this Act shall be deemed to commence on the date when this Act enters into force.

① Cases that were insufficiently investigated by the Presidential Truth Commission on Suspicious Deaths for reasons such as lack of time may be reopened if the Commission deems it necessary for further investigation under Article 22.

② In the case an investigation is subject to paragraph 1, the statute of limitations of public prosecution shall be from the date of the criminal act to the time of the accusation or request for an investigation.

It seems that the mission of the Commission is quite different from previous transitional justice efforts (such as the Presidential Truth Committee on Suspicious Deaths), due in large part to the emphasis on reconciliation.

The correct title for the commission mentioned in the parenthesis above is the “Presidential Commission on Suspicious Deaths in the Military”. As indicated in its name, there is a clear distinction in its scope of investigation compared to our commission. It only deals with cases in the military, while our commission broadly deals with human rights abuses beginning Koreas democratization process to the end of the authoritarian regime of 1992. Additionally, there was also a commission named the Presidential Truth Commission on Suspicious Deaths, which ceased its investigative activities on June 30, 2004. The other commissions in Korea involved in related truth-finding work investigated distinct areas covering either different time periods or different sectors of society.

Although there are several other past-related commissions in Korea, they are quite different from our commission in terms of their mission and objectives. We believe truth-finding work is an initial step to reaching reconciliation. Without it, the achievement of reconciliation would be practically impossible. All of the above-mentioned commissions are dedicated to uncovering the truth from past wrongdoings. In this sense, they share the same qualifications to investigate cases for reconciliation, which is the fundamental goal of all truth-finding activities.

To what extent is reconciliation a goal of the Commission and what mandate do you have?

The Commission does not have any authority to prosecute or provide economic compensation to victims, but it has some authority to investigate filed cases and submit recommendations to the concerned governmental organizations. We must also submit investigated reports to the President and the National Assembly twice a year, and afterwards, report the findings to any interested parties. Although the Commission does not have direct authority to prosecute, petitioners are still empowered through using the Commission’s findings for judicial settlements, often resulting in some kind of compensation.

How does the Commission pursue reconciliation (Truth-telling/Apologies from perpetrators/Reparations from the courts)?

Measures below are used to seek reconciliation between perpetrators and victims.

The investigative scope of the Commission largely covers three different areas: Overseas independence movements during the Japanese occupation, Massacres before and during the Korean War, and human rights abuses during Korea’s democratization. There were previous efforts to seek truth and settle past wrongdoings. In 1948, a special law was passed to prosecute Japanese collaborators during Japan’s colonial regime, yet it was annulled in 1951. This law is largely acknowledged as unsuccessful. In addition, a large number of those accused of collaborating with the Japanese occupational government were never brought to trial.

Secondly, in the political vacuum after the fall of Syngman Rhee in 1960, the victims’ families of the Korean War protested to demand settlement for their grievances. The Korean National Assembly responded by investigating the massacres. However, after the May 16 Military Coup of 1961, the military oppressed those activities and abolished further investigation.

Although during the period of military dictatorships in Korea little attention was given to the truth-finding work in the governmental arena, there were constant movements among civil groups and the public dedicated to rectifying past incidents; the Gwangju Democratization Movement in 1980, the Student Demonstration at Konkuk University in 1987, etc. These are good examples of how people and civil groups continued to pursue the truth even under severe authoritarian repression. In 1995, a valuable lesson was proven with the prosecution and sentencing of two former authoritarian rulers of Korea, Chun Doo-Hwan and Rho Tae-Woo; even successful coups can be punished.

Laws for rectifying the past were passed under the Kim Dae Jung government (1998-2003). On October 17, 2000, then President Kim Dae-Jung inaugurated the Presidential Truth Commission on Suspicious Deaths to investigate the death of citizens opposed to past authoritarian regimes in South Korea. Earlier that year, on January 15, the enactment of the Special Act to Find the Truth about Suspicious Deaths created the commission and established its mandate to investigate deaths upon the request of petitioners, to report its findings and recommendations to the president, and to identify perpetrators of human rights abuses for prosecution.

cases, including 9 dismissal cases. Through the investigation of individual cases of suspicious death, the Commission has revealed illegal violations of human rights by past authoritarian regimes.

The PTC has brought to light the authoritarian regimes actual practices of repressing the democratization movement, the abuse of state power and routine infringements of basic civil rights. This has given the government grounds for clarifying Koreas shameful history, and the opportunity to develop the country into a democratic state with a high awareness of human rights.

However, the PTCs investigations were greatly hampered by the negligence of the Military Information Headquarters and the National Intelligence Service in providing materials and documents connected with the deaths, and their prevention of the investigators from approaching targets to be investigated. Investigations of suspicious deaths were accompanied by many difficulties, which included the fact that state power involved in the deaths may have tried to systematically to hide the real facts, that none of the scenes of the death had been preserved, that some documents and evidence were lost, and that some crucial witnesses had died or had lost their memories.

Many other countries also share similar stories as Korea. Not to mention the countries involved in World War I and II, there are still many countries out there offering exemplary stories in regards to truth-finding work. Among those, we can easily take exemplary cases from South Africa, Chile, Argentina, Peru, Rwanda, Cambodia, Indonesia, Spain, Canada, and the U.S. Our commission tries to build an international alliance to make the truth-finding process easier for the respective nations involved. Currently, we are working toward developing an MOU with Argentina.

In terms of the proposals for a special pardon, reinstatement, or reduction of penalties, how often are these proposals honored and/or accepted?

The Commission is only empowered with submitting recommendations in accordance with its findings.

How does the Commission pursue reconciliation between offenders, victims, and victims’ families? Was this a part of the mandate of past truth commissions in Korea?

Through recommendations, the Commission has assisted in bringing about formal apologies from the government, retrials on previous judicial cases, documentation of historical records, memorial services, etc.

In your opinion, would you say that the State has shown respect for Commission proposals and decisions to this point? Are there any guarantees of this?

Has the Reconciliation Foundation been established yet? If so, what services and exhibitions have been held?

The Reconciliation Foundation has not been established yet. The Commission is currently working towards this and expects to see a draft by March 2009.

What is the role of the Reconciliation Commission? Is there any information as to the scope, power, and organization of this proposed body?

The Reconciliation Commission was constituted on June 19, 2007 in order to deliberate and resolve issues concerning restoring honor to victims, issuing special pardons for the victims, recommending reinstatements, preventing similar cases from reoccurring, etc.