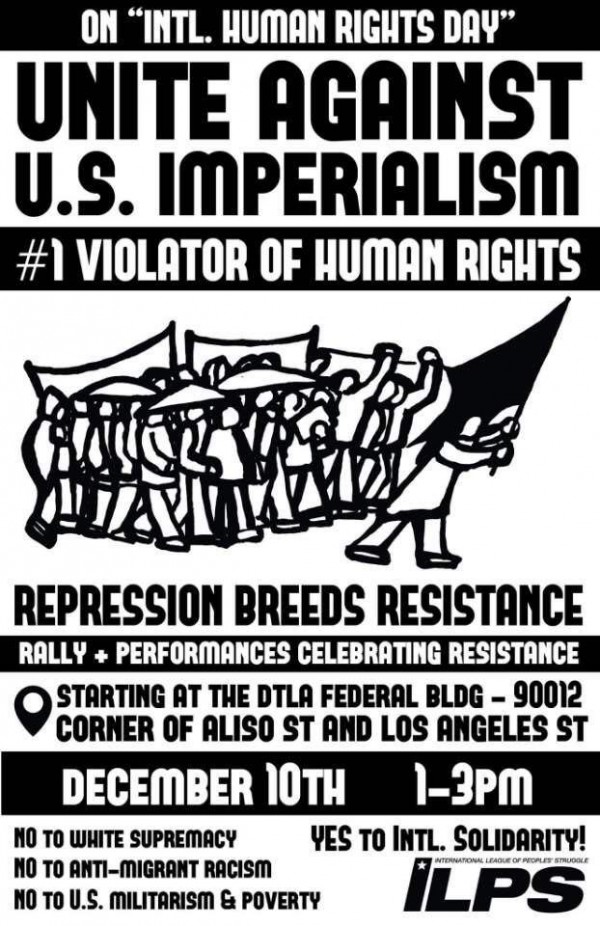 Why:     Ranging from local progressive organizations to international and migrant groups fighting for justice, hosts and endorsers of this action are dynamically varied in focus and united in solidarity with the oppressed and exploited of the world by the common analysis that U.S. militarization and empire creates the most numerous and worst forms of human rights violations throughout the world.

Timothy Bluitt, a Black veteran of the Vietnam War and representative for the International Action Center: “Wars of aggression are evil and counter productive. Instead of feeding the over-bloated Pentagon, money should be directed to the social uplift of humanity such as universal health care and free education from preschool to PhD."

Bev Tang, coordinator of ILPS SoCal: “We cannot allow the filthy rich like Trump and his cronies to continue to abuse their power & multi-national corporations to steer our governments to war for the sake of enriching themselves and amassing more power. This is why the International League of Peoples’ Struggle (ILPS) continues to bring together people around the globe from communities suffering from the violence of U.S. militarization here and abroad to build the resistance needed to fightback for our rights and to protect the earth we live on.”