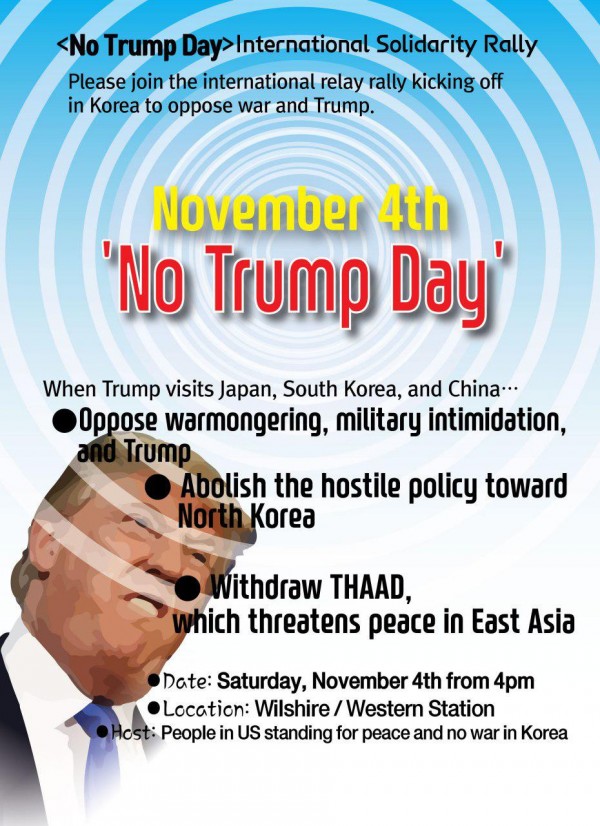 On Wednesday, October 25, 2017, fifteen South Korean youth activists were denied entry into the United States. Their delegation, Ban Trump’s Crazy action (BTC), was coming to the United States to protest Trump administration policies and proclamations toward North Korea – “fire and fury,” “totally destroy North Korea” - that are escalating tensions on the Korean peninsula and threatening a second Korean War.

But when they arrived at Incheon International airport, U.S. officials blocked their departure telling the youth their ESTA (Electronic System for Travel Authorization) was not valid and that they needed hardcopy visas issued by the U.S. embassy. They later discovered that their ESTA approvals had been canceled earlier that morning. One member of their group who had earlier left for the United States was stopped at JFK airport, held in detention without access to a telephone, and scheduled for deportation the next day.

After being blocked from entering the United States, the delegation immediately held a protest at the airport and then moved to the U.S. Embassy in Seoul for a press conference. As peace-loving youth, they expressed shock at having been banned from entry into the United States. Their intention was only to protest Trump’s escalation of tension in Korea through dance, song, and marching, and to meet U.S. citizens who share their desire for peace. “Why do you fear us, Trump? We are not terrorists. Lift the entry ban now!,” they proclaimed. BTC will continue to protest their ban at the U.S. Embassy and hold peace vigils until Donald Trump’s arrival in Seoul on November 7th.

As organizations and individuals who advocate open borders, freedom of speech, and peaceful resolution of international conflicts, we strongly protest the U.S. entry ban of the members of BTC and demand a full explanation for this action and immediate reversal of this decision. We also forcefully oppose the Trump administration’s escalation of tension with North Korea, fully support South Korean peacemakers mobilizing to protest Trump’s visit to their country and preparing for mass demonstrations on November 4th, and stand in solidarity with all people - Koreans, citizens of the United States, and others throughout the world - unconditionally committed to preventing a second Korean War.

People in U.S. standing for peace and no wars in the Korean Peninsula