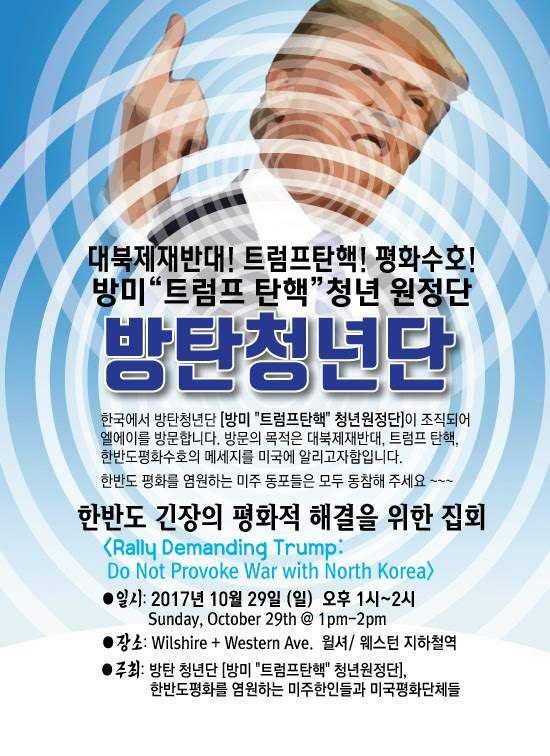 TO: Korean and mainstream media outlets in the Los Angeles area

CONTENTS: <No Trump Day> Rally Info and Press Conference to Denounce the Denial of <BTC/”Ban Trump’s Crazy Action”> Entry to the United States

1) South Koreans plan international <No Trump Day> relay demonstrations starting in Korea in response to President Trump’s November visits to Japan, South Korea, and China. Progressive Korean Americans and non-Korean peace organizations in Los Angeles will participate in the <No Trump Day> rally on Saturday, November 4th. <No Trump Day> opposes warmongering, military intimidation, and Trump; demands withdrawal of THAAD and hostile policies toward North Korea; and calls for peace on the Korean peninsula and East Asia. Our rally includes activities specific to the context of the Los Angeles area.

2) The threat of war on the Korean peninsula has escalated due to President Trump’s recent callous remarks to “totally destroy” North Korea, as well as the United States’ total strategic military assets in Korea. A South Korean youth delegation called BTC/”Ban Trump’s Crazy Action” planned to visit New York, Washington D.C., and Los Angeles from October 25th to November 1st in protest of Trump’s warmongering and to urge the use of dialogue with North Korea instead of sanctions. However, on October 25th at Incheon International Airport, U.S. authorities barred BTC from leaving Korea for the United States.

3) Progressive Korean and American organizations seeking peace on the Korean peninsula invite Korean and mainstream media outlets to attend a press conference addressing <No Trump Day> demonstrations and the denial of BTC’s entry to the United States.