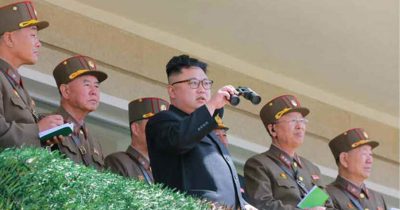 This article was first published by Global Research in August 2017

The Democratic People’s Republic of North Korea is ramping up its nuclear deterrence, and this is causing consternation and wild proclamations from western officials and corporate media. What is particularly galling for the United States side is that North Korea appears to have achieved the capability of hitting the US mainland with ICBMs.

However, is the US not capable of hitting North Korea from wherever? So why does a rival created by the US [1] cause panicked rhetoric upon achievement of an ICBM capacity?

“The only way they [the North Korean government] are going to change is if they believe there is a credible threat of military force on the table.”

Graham believes any war will be confined to the East Asian region.

Why would Graham speak such provocative words? Follow the money. Graham’s campaign fundraising appears aimed at the arms industry: “Security through Strength.”

US secretary-of-state Rex Tillerson is advocating “peaceful pressure” against North Korea and a willingness to hold talks. However, there is a condition, which certainly will not entice the North Koreans to talks. That condition is that the North Koreans disarm themselves of nuclear weapons and the means to deliver them. What is unstated is that the US will not disarm in any way whatsoever. The lessons of the disarmed and subsequently destroyed Iraqi and Libyan castles would seem to urge a cautionary approach.

Jack Rice, a former CIA agent, referred to North Korea as a “threat.” Why? Who is threatening who? North Korea has pledged no-first-use of nukes. The US has not. So who is the actual threat?

The US is modernizing its nuclear stockpile which is a stark abrogation of its undertaking as a signatory of the Treaty on the Non-Proliferation of Nuclear Weapons. The NPT’s Article VI states:

Each of the Parties to the Treaty undertakes to pursue negotiations in good faith on effective measures relating to cessation of the nuclear arms race at an early date and to nuclear disarmament, and on a treaty on general and complete disarmament under strict and effective international control. [emphasis added]

North Korea has never attacked the US. It was the US that attacked North Korea during the so-called Korean War. The US used chemical and biological weapons, resulting in an estimated 4-10 million Koreans being killed. [2]

A Rationale Analysis of What a Nuclear-armed North Korea Portends

1. It is clear from the cases of Iraq and Libya that a disarmed US-designated enemy is not spared from a violent opportunistic attack. That North Korea was included on George W Bush’s “axis of evil” along with Iraq triggered alarm bells in North Korea.

2. The US refuses a peace treaty with North Korea. [3] And the sanctions against North Korea constitute an act-of-war. Trump tweeted, “China could easily solve this problem.” But it is not China maintaining a state-of-war with North Korea.

3. The US is nuclear-armed, has used nuclear weapons, and does not adhere to a no-first-use policy.

Given the above three points would it be rationale to be without an effective deterrence against a military attack?

Furthermore, when North Korea did enter into an Agreed Framework with the US in 1994, among the obligations was an end to hostilities; normalization of relations, no nuclearization of the peninsula; freezing operation and construction of North Korean nuclear reactors in exchange for two proliferation-resistant nuclear power reactors; and, while awaiting completion of the nuclear reactors, the US was to provide oil for North Korean energy needs. The US did not fulfill its obligations. In other words, the US cannot be trusted to uphold its end of any agreement.

If North Korea were ever to launch a nuclear weapon or even launch a non-nuclear attack against another country, then the North Korean government would be committing an act of suicide. Kim Jong-un’s grandfather and father were not suicidal, so there is no reason to suspect familial psychosis.

If North Korea has achieved and maintains an effective nuclear deterrence, then a US attack is only imaginable in a nightmare Bizarro World. An attack on a nuclear-armed North Korea would be mad. The US would not be unscathed in such an attack. Major population centers such as Seoul, Busan, and Tokyo (all where US troops are stationed) and perhaps the US mainland would be hit. Of course, North Korea would be obliterated. Even if continental US were not hit by nukes, the radiation from nuclear fallout and a potential nuclear winter will affect the entire planet.

Consequently, all the talk in the media of a war is irrational conjecture or bluffing.

Rationality demands that all sides avoid any brinkmanship.

Kim Petersen is a former co-editor of the Dissident Voice newsletter. He can be reached at: kimohp@gmail.com. Twitter: @kimpetersen.