The Long, Dirty History of U.S. Warmongering against North Korea 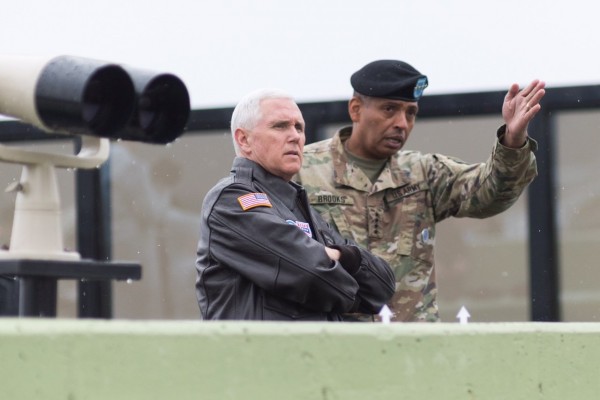 As the latest North Korea crisis unfolded, and Donald Trump swapped campaign plowshares for post-inauguration swords, Americans took to the streets demanding that the President release his tax returns and then marched for science. There were no mass protests for peace.

Although the substance of Trump’s foreign policy remains opaque, he had campaigned on an “America First” critique of Barack Obama and Hillary Clinton’s liberal interventionism in Libya and, to his own party’s mortification, blasted George W. Bush’s neoconservative adventurism in Iraq.

Once in the White House, though, Trump announced he would boost the U.S. military budget by a staggering $54 billion and cut back on diplomacy, while pushing the United States to the brink of active conflict with North Korea. None of this provoked a major backlash. To the contrary, Trump’s surprise bombing of Syria, which, his administration declared, doubled as a warning for North Korea, garnered him across-the-aisle praise from hawks in both parties and his highest approval ratings so far.

The American public’s quietism with regard to the prospect of renewed U.S. aggression against North Korea is remarkable. It stands in stark contrast to the broad anti-war galvanization in the post-9/11 lead-up to the U.S. war in Iraq and the widespread protests against the Vietnam War in an earlier era.

The American public’s quietism with regard to the prospect of renewed U.S. aggression against North Korea is remarkable.

To some degree, it recalls the muted mid-twentieth century political terrain that led to the Korean War—a brutal, dirty, and unresolved conflict that set the model for subsequent U.S. intervention. One of the few voices of opposition, Paul Robeson, in a critique that resonates to this day, lambasted his fellow citizens’ “meek conformity with the policies of the war-minded, the racists, and the rich.”

That “the maw of warmakers [was] insatiable” in Korea, as Robeson remarked in 1950, could be seen in the massive devastation of human life. The Korean War was an asymmetrical conflict in which the United States monopolized the skies, raining down ruin. Four million Koreans—the vast majority of them civilians—were killed. Chinese statistics indicate that North Korea lost thirty percent of its population. In North Korea where no family was left unscathed by the terroristic violence of the Korean War, anti-Americanism thus cannot be dismissed as state ideology alone.

More than almost anyone in the world, North Koreans know intimately what it means to be in the crosshairs of the American war machine. In May 1951, writer and activist Monica Felton observed that in the course of her travels through North Korea as part of an international fact-finding delegation, “the same scenes of destruction repeated themselves over and over again . . . . The destruction, in fact, is so overwhelming that if the war is allowed to continue—even for another few months—there will be nothing left of Korea. Nothing at all.” It is no coincidence that the phoenix serves as one of North Korea’s national emblems.

More than almost anyone in the world, North Koreans know intimately what it means to be in the crosshairs of the American war machine.

Then, as now, Korea rested in the hazy recesses of American consciousness, mostly out of sight, mostly out of mind. When recently asked to comment on the catastrophe that would ensue were Trump to authorize a preemptive strike against North Korea, Senator Lindsey Graham, Republican of South Carolina, responded with chilling candor:

Although famously at odds with Trump on numerous other matters, Graham here captured the pyrrhic spirit of the President’s “America First” foreign policy, a self-privileging worldview that allows for untold ruin and suffering so long as they remain far from our shores.

Graham’s statement is in keeping with the time-honored American tradition of envisioning apocalypse for North Korea—a tradition that survived the Cold War’s end and has served as through-line across successive U.S. presidencies. In recent days, we have been told that the United States must entertain all possible scenarios against North Korea as an interloper in the nuclear club, including a preemptive nuclear strike.

It has been drilled into our heads that North Korea poses a clear and chronic danger, a threat not just to the United States and its allies in Asia and the Pacific, but also to all of humanity. Yet as Donald MacIntyre, Seoul bureau chief for Time magazine during the George W. Bush era, has observed, when it comes to North Korea, Western media has faithfully adhered to a “demonization script” and in so doing has helped to “lay the groundwork for war.” Conditioned by jingoistic portraits of the North Korean enemy—“axis of evil,” “outpost of tyranny,” “rogue state”—and complacent in our displacement of risk onto them, not us, we consent to North Korea’s extinction in advance.

Instability in Korea has, for several decades, lined the pockets of those who profit from the business of war. Indeed, the Korean War rehabilitated a U.S. economy geared, as a result of World War II, toward total war. Seized as opportunity, the war enabled the Truman administration to triple U.S. defense spending, and furnished a rationale for the bilateral linking of Asian client states to the United States and the establishment of what Chalmers Johnson called an “empire of bases” in the Pacific. General James Van Fleet, the commanding officer of UN forces in Korea, described the war as “a blessing” and remarked, “There had to be a Korea either here or some place in the world.”

Instability in Korea has, for several decades, lined the pockets of those who profit from the business of war.

[I]t was the Korean War, not Greece or Turkey or the Marshall Plan or Vietnam, that inaugurated big defense budgets and the national security state, that transformed a limited containment doctrine into a global crusade, that ignited McCarthyism just as it seemed to fizzle, and thereby gave the Cold War its long run.

Fast-forward to the present: the portrait of an unpredictable nuclear-armed North Korea greases the cogs of the U.S. war machine and fuels the military-industrial complex. Within Asia and the Pacific, this jingoistic portrait has justified the accelerated deployment of missile-defense systems in Guam and South Korea, the strategic positioning of nuclear aircraft carriers, the sales of military weapons, war exercises between the United States and its regional allies, and a forward-deployed U.S. military posture. Even as China is without question the main economic rival of the United States, an armed and dangerous North Korea furnishes the pretext for a heavily militarized U.S. presence in the region.

Unsurprisingly, few media outlets have reported on North Korea’s overtures to the United States, even as these, if pursued, might result in meaningful de-escalation on both sides. To be clear: peaceful alternatives are at hand. Far from being an intractable foe, North Korea has repeatedly asked the United States to sign a peace treaty that would bring the unresolved Korean War to a long-overdue end.

Few media outlets have reported on North Korea’s overtures to the United States.

It has also proposed that the United States cease its annual war games with South Korea—games, we must recognize, that involve the simulated invasion and occupation of North Korea, the “decapitation” of its leadership, and rehearsals of a preemptive nuclear strike. In return, North Korea will cap its nuclear weapons testing. China has reiterated this proposal. The United States maintains that its joint war games with South Korea are simply business as usual and has not seen fit to respond.

With the giant triplets of racism, materialism, and militarism rearing their heads in our current moment, we have cause to be gravely concerned. During his recent anti-North Korea tour of Asia and the Pacific, Vice President Mike Pence grimly stated, “The sword stands ready,” with no sense that plowshares might be in the offing. The implication in the Trump administration’s words (“all options are on the table,” “rogue state,” “behaving very badly”) and deeds (the U.S. bombings of Syria and Afghanistan) is that force is the only lingua franca available, and that with North Korea, we must learn war over and over again.

Almost seventy years ago, we entered into a war with North Korea that has never ended. At the time, only a handful of Americans raised their voices in opposition. Let’s not let the historical record reflect our silence now.

Christine Hong is an associate professor at the University of California, Santa Cruz, and an executive board member of the Korea Policy Institute. She has spent time in North Korea, including as part of a North American peace delegation.

Our reporting takes time and money. Please help us to continue to produce quality journalism by donating today.

Become a Monthly Sustainer (just $5 a month and you’ll receive the print magazine too!) or support The Progressive’s online reporting with a one-time donation.