THAAD Deployment into Korea Must Be Interrupted > News

THAAD Deployment into Korea Must Be Interrupted

The USA and China Should Resume the Negotiationson the NK Nuke

Korean people keep sharp attention to the development of which U.S. President Trump and the Chinese National Chairman Xi Jin Ping would deal with the deployment of THAAD onto Korean Peninsula and what will be discussed over the matter during the summit talk held during 6th and 7th of April in the U.S.A.

The United States has already announced that it will deploy THAAD to the boundary of Seongju County, Gyungsangbuk-do, Korea.

The United States is now unilaterally enforcing THAAD deployment without any normal and proper agreement with the Republic of Korea, even though the current situation in South Korea is such that the Korean former president, who had initiated such process, had recently been impeached, finally followed in the conclusion as arrest for corruption and undoing affairs, and it is scheduled for the next presidential election in coming early May.

Despite such situation of critical momentum, US government has completely neglected the sovereignty of Korea.

Strongly against to the US's THAAD deployment to South Korea, China does take every possible measures and sanctions against Korea related to the economic, cultural, trade and tourism matters.

While fully acknowledging that there are strong resolute oppositions among Koreans against THAAD deployment in Korea, China has taken such unilateral sanctions in stirring up criticism against South Korea, which has made China's national decency in question.

The attitude of the world dual super powers is nothing but an act of pushing Korea to the corner in-between as a sacrifice due from their own conflicts of the power struggle.

We boldly request that the US should interrupt the deployment of THAAD to South Korea and China should withdraw the sanctions against South Korea at the summit talk.

Recently, people in the world have appraised that Korean democratic citizens ousted out the corrupt president from her presidency through the peaceful, non-violent candlelight demonstrations.

Having made the series of more than twenty times candlelight demonstrations in every weekend and even some working days, 17 million citizens in accumulated number are modestly realizing the advancement of democracy through the peaceful and non-violent rallies.

When Seongju County was nominated as the base for THAAD, the county residents immediately protested the government to move the THAAD base to another place in the peninsular. However, surprisingly, the local senior Confucian scholars pointed out that, “such request itself is foolish because harmful weapons to one people are also harmful to another; therefore, such a harmful weapon like THAAD must not be deployed in any corner of our country.”

After the Japanese imperialist harsh period had ended in the peninsular, Korean people desired to establish an independent and unified nation, but which were frustrated by the US-Soviet military occupations of the peninsula, which had to be split into North and South. Then, the divided Korea was entangled into the international war where the US and China were in collision.

As such, the residents of the Korean peninsula have been being forced to undergo the tragic status of national division, while constantly experiencing daily life under the threat of war crises for more than 70 years.

The US is imposing THAAD deployment on Korea, while China is exercising various sanctions and reprisals on South Korea under the notice of THAAD deployment. We loudly request both governments for a sincere and careful consideration on the historic dream for ‘Peace of the Korean people on the peninsula’.

We know that the US and China are struggling in conflict on North Korea's stubborn attitude regarding the development status of nuke weapons and the related delivering system of them.

We would like to suggest that Trump's new administration, differently from the previous governments, should take a fresh approach to North Korea who has been suffering from such anxiety of the regime collapse,

Chinese Foreign Minister, Wang Yi suggests that the countries in concerns should resume the negotiations over the North Korea's nuke development by mutually accepting such measures as freezing the North Korean nuke activities and suspending the US-South Korea military exercises at the same time, which can lead the agreement that there must be no need for the THAAD deployment.

We sincerely urge the North Korean authorities as follows.

The nuclear-missile development that North Korea has executed so far is enough to secure the base of such negotiations for the security of North Korean regime.

North Korea should bear in mind that further reckless nuke exercise could ruin North Korea's own security into disaster, and put the entire Korean peninsula into critically dangerous situation.

It is very important for North Korea to refrain from jeopardizing the situation of the peninsular any further while the next South Korean government takes position to an active role toward peace process.

We sincerely expect the US-China Summit Talk, held early in April, to be a historic event of memory, initiating the interruption of the THAAD deployment and leading to transferring the North Korean nuke issue to the negotiation table between countries in concerns, which is the imperative request from Korean citizens of advanced democracy. 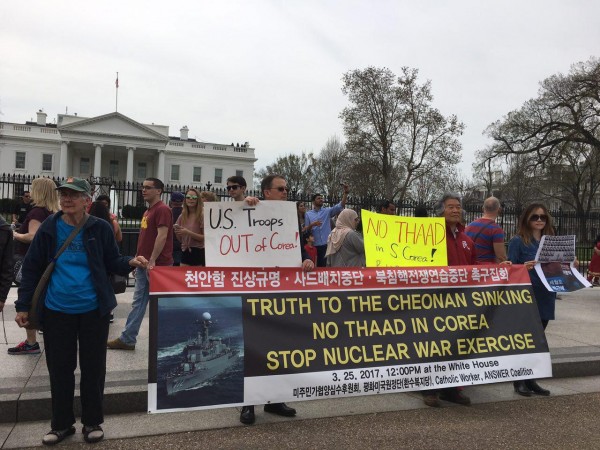