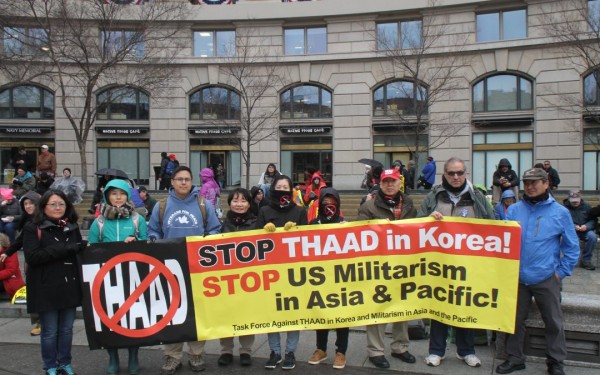 “Stop the U.S. war machine! From Iraq to Korea to the Philippines!” — that is what a group of anti-war peace activists chanted during an anti-Trump rally on the day of Donald Trump’s inauguration as the 45th U.S. president on January 20. They reminded progressive forces in the U.S. about international struggles opposing U.S. militarism, particularly in the Asia Pacific region and the Korean Peninsula. 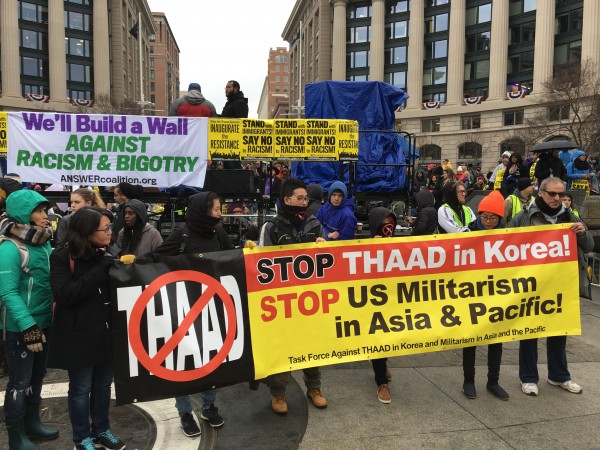 Representatives of the Task Force to Stop THAAD in Korea and Militarism in Asia and the Pacific (Stop THAAD Task Force) joined the rally organized by the ANSWER Coalition at Navy Memorial Plaza in Washington DC. Standing with the hundreds of thousands gathered to  express opposition to the incoming Trump administration and all that it stands for, they demanded the U.S. rescind its plan to deploy the Terminal High Altitude Area Defense (THAAD) missile system in South Korea.

Will Griffin of Veterans for Peace (VFP), a member of the Stop THAAD Task Force, spoke about the danger of nuclear warfare, intensified by the deployment of U.S. missile defense systems around the world, including the THAAD missile system to be deployed in South Korea. Griffin pointed to the THAAD deployment as part of U.S.’ expansion of perpetual war, which only benefits the military industrial complex — “The U.S. military is leading and escalating nuclear warfare in this century… [The THAAD is] increasing tensions with North Korea, China, Russia… the U.S. military and its industrial complex do not care what happens to the rest of the world.” 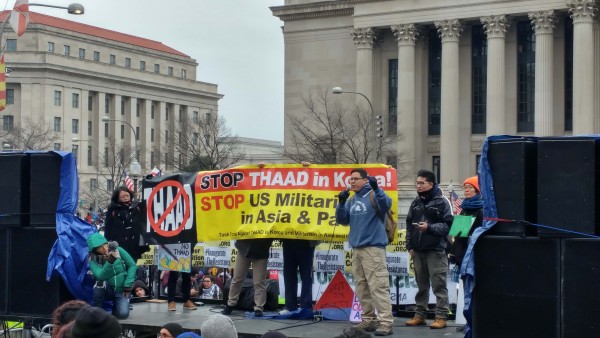 David Li of the New York City-based Nodutdol for Korean Community Development, also a member of the Stop THAAD Task Force, paid tribute in spoken word to the South Korean people of Seongju County and Gimcheon City and their fight to stop the THAAD deployment. Li denounced the U.S. government for ignoring Seongju and Gimcheon residents’ demands to call off the THAAD deployment:

Why can’t you see the waves of candlelight,

From Seongju and Gimcheon shining bright.

To protect the peace, they carry on the fight,

So that YOUR war machine plan is no longer in sight.

We know whose interests YOU want to protect.

We know how you want to control and affect

The region to keep an eye and detect

Activities of your rivals — IN EFFECT,

To peel off the skin of your Asia Pivot,

We learn that it only continues to perpetually reject

The sovereignty of our people.

Li also questioned whether the THAAD system is really for defense:

Studies show that THAAD is NOT for defense.

So we vocalize nothing but the truth in defiance.

Don’t deny because we know this system is for offense,

And your grand trilateral military alliance,

Tying countries up conditioning them in reliance,

Hyun Lee, also a member of Nodutdol and the Stop THAAD Task Force, spoke about the history and current status of relations between the U.S. and North Korea.

(Video footage from Will Griffin and C-SPAN)

Lee called on the U.S. government to find a peaceful resolution to the crisis on the Korean Peninsula and stop provoking war through military exercises that simulate the collapse of the North Korean regime. She spoke about the need — “now more than ever” — for a peace treaty to end the Korean War and called on U.S. activists and progressive-minded people to support the struggle of the Korean people against war and militarism:

She concluded by chanting, “End the Korean War! Peace treaty now! U.S. troops out of Korea!”

The Stop THAAD Task Force was one of many groups at the anti-Trump rally along the official parade route on the day of Trump’s inauguration. Various movements from across the country, from those fighting for the rights of immigrants, women and LGBTQs to labor and racial justice activists and peace and anti-war groups, coalesced on day one of Trump’s presidency and pledged to fight his right-wing agenda.