Some days ago, the U.S. and the south Korean puppet forces held the 41st meeting of the Military Commission in the U.S. at which they discussed security and military posture on the Korean peninsula and transfer of OPECON. Next day they held a meeting of chairmen of Joint Chiefs of Staff with Japan present at which they agreed to steadily boost “cooperation to cope with the nuclear and missile threat from the north” and “cooperation in security”.

In other words, these were dangerous war confabs to make a preemptive attack on the north a fait accompli with U.S. nuclear strategic assets involved and step up the formation of the triangular military alliance for aggression under the “pretext of coping with the nuclear and missile threat from the north”.

At the 41st meeting of the Military Commission the U.S. and the south Korean puppet forces were closeted over the issues of “providing extended deterrence” to south Korea and “substantially strengthening the tailored deterrence strategy” while labeling the DPRK’s measures for bolstering up the military capability for self-defense as “provocation”.

What they discussed at the recent war huddle revealed their cynical ploy to carry out the “three-phase tailored deterrence strategy” by massively introducing the U.S. nuclear strategic assets under the pretext of the “nuclear and missile threat from the north”.

The above-said meeting of chairmen of Joint Chiefs of Staff should not be overlooked.

The meeting held in the U.S. goes to prove that the formation of the triangular military alliance has become a matter of the time, in fact.

It is as clear as noonday that the chariot of the triangular military alliance being driven by the U.S. at breakneck speed will screw up the tension on the Korean peninsula and in its vicinity, increase the danger of a nuclear war and entail catastrophic consequences. 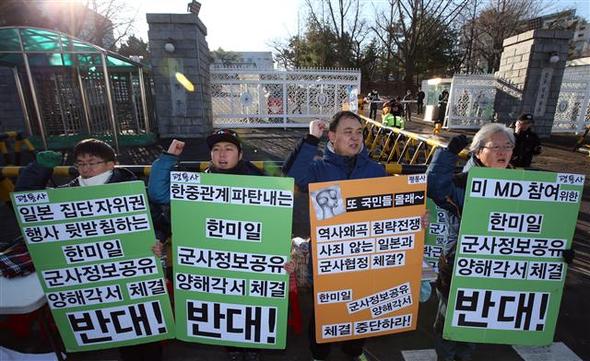