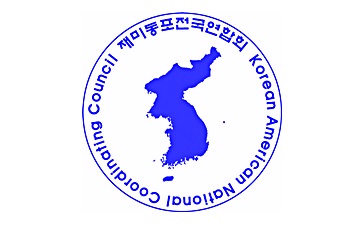 Korea’s place in the minds of American people

Primarily due to the tumultuous international relationship existing between the United States and Korea, both South and North, in the past seven decades, the general perception of American people on the people and countries in Korean peninsula is complex and, to say the least, often misrepresented.

The first written record on the ethnicity of Korean people was known to be found nearly 5,000 years ago. They occupied a significant part of what is now known as Manchuria and extended to the current Korean peninsula to the south. Although they had their own distinct culture and language, records are abundant showing the evidence of their influence and contribution to the culture and civilization of its Chinese neighbor; for example, it is generally accepted by the Chinese language scholars that their symbolic Chinese characters were developed by the ancient Koreans.

However, Korean’s geopolitical location being surrounded by, even to this date, powerful and ambitious superpower neighbors, China, Manchuria, Russia, Japan, United States, and Mongolia in the past, has had resulted in the continuation of the troublesome history of Korean people in the past thousands of years. This, in a way, contributed to the formulation of the characteristics of Korean people who distrusts its neighbors and at the same time depend on its neighbors in the internal struggles among themselves. It has been said that including the attacks by the Japanese pirates, the country of Korea had been invaded by its neighbors once every other year in its history!

On the contrary, history is clear that in its long existence, Koreans have, never even once, invaded other countries.

The last foreign invasion of Korea was in 1910, when Japan colonialized the peninsula by abolishing the Lee Dynasty, the last feudal regime existing on the peninsula. Their harsh rule on Korean people lasted for 36 years, when in 1945 the WW II ended with their defeat and resultant occupation of northern half by the Russians and the south by the Americans; the beginning of the cold war and the current fundamental problem of Koreans; the appearance of two Koreas, North Korea (DPRK) and South Korea (ROK) and subsequent disastrous Korean War (1950-1953) between them, which in reality was a war of proxy between the cold war superpowers. The immediate effects of the war was near complete devastation of the peninsula with the war-death estimated to be 1.7 million.

However, the long- term effect of the war was much more significant and tragic to the Koreans.  Since it was an armistice at Panmunjom between the U.S. and the DPRK and was never followed by the peace treaty, the enmity between the north and south as well as the north and U.S. lasted to this date over a 70 year period. It also provided reasons for the predominant influence of the U.S. on the south, militarily, politically and sometimes economically. To this date, even the war-time operational control of south Korean military is under the U.S. commander. Needless to say, its effect on North Korea was direct and harsh. Isolations, embargoes, sanctions have caused the emergence of an extremely tight socialist society with a strong military emphasis and political uniformity and eventually a nuclear ability with delivery capability.

It goes without saying, therefore that the only country that has solutions to this multi-level problems in Korean peninsula is the United States:

We appeal to American people to urge their government to relieve sanctions, embargos, and any other economic isolations against North Korea;

We appeal to American people to urge their government to normalize diplomatic relations with North Korea and establish peace treaty with them;

We appeal to American people to urge their government to cease any military maneuvers in the vicinity of North Korea;

We appeal to American people to urge their government to nullify the travel bans between us and North Korea;

We appeal to American people to urge their government to resume the summit meeting between us and North Korea, following up Singapore and Hanoi;

Lastly, we appeal to American people to urge their government to remove our military presence in South Korea, and respect and fully recognize the sovereignty of South Korea, Republic of Korea. 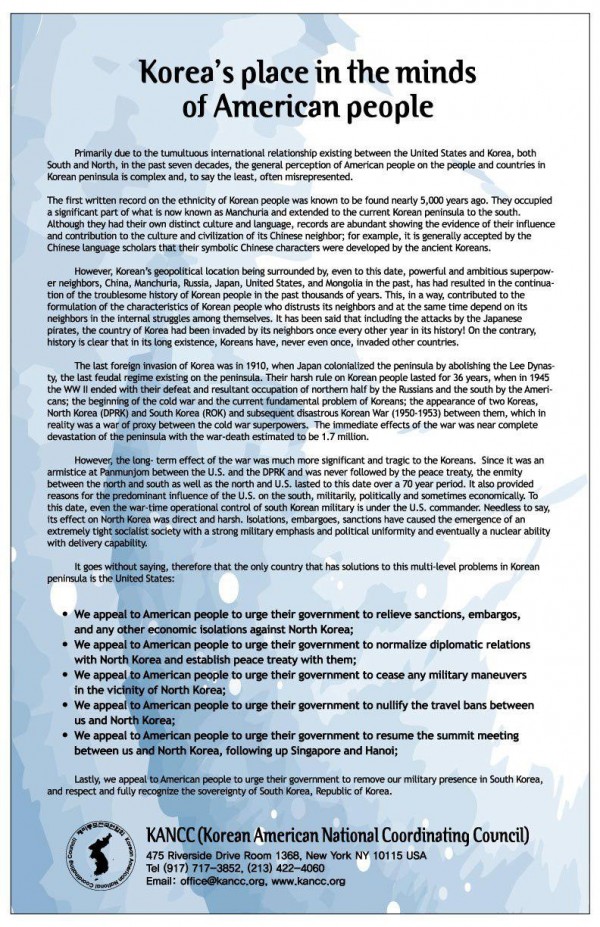